Cameroon’s Educational System: A comparative Analysis and relevance to the development of human capital

Home/General, Policy/Cameroon’s Educational System: A comparative Analysis and relevance to the development of human capital
Previous Next

Cameroon’s Educational System: A comparative Analysis and relevance to the development of human capital 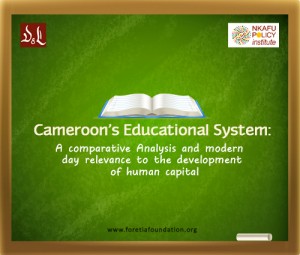 [dropcap type=”circle” color=”#FFFFFF” background=”#8C212A”]E[/dropcap]ducation is, undoubtedly, a significant determinant of the economic situation of a country; critical to growth prospects, productivity and the competitiveness of its labor force in the international arena. This implies the need for adaptability to meet growing international labor demands in terms of developing modules that respond to the ever increasing economic, business, governance and leadership needs to the ability of being able to foresee and preempt upcoming global challenges. In recent decades, many African countries have come to realize the crucial role that the educational sector plays in the economy, and are responding with significant investment. Other countries have been lagging behind.

In recent years, both the private sector and the government of Cameroon have made huge investments in the overall infrastructural development of educational institutions in Cameroon. Such developments include the establishment of new faculties within universities, the creation of new universities and other institutions of higher learning, the recruitment of new instructors to boost the teacher-student ratio and an increase in the operational budget of institutions of higher learning. All are a bid to respond to the growing domestic and international demand for quality graduates within the country, in particular, and the Central African sub-region as a whole. Despite this investing, very important questions remain to be answered.

Some of these questions include: – Has the overall quality of graduates been improved and do they meet the needs (in terms of skills and expertise) of the business environment of the country? – How competitive are graduates from educational institutes in Cameroon vis-a-vis their counterparts from other African nations? To provide relevant answers, a detailed examination of the stakeholders (public and private) needs to be examined.

The Human Capital Theory suggests that “… an individual’s optimal investment in human capital calls for a consideration of both human and financial capacities and the prospective utilization of capital that is being accumulated” (Zamo-Akono & Tsafack , 2013). Therefore before embarking on such an investment, an individual must be convinced of the usefulness (in the labor market) of what s/he seeks to gain. Therefore educational attainments are thought to be a plausible cause for wage differentials. In Cameroon, there is a growing dispute about the differences in the quality of graduates of public institutions of higher learning as compared to graduates from private institutions. In public institutions – until recently – the introduction of professional programs that demand greater-than average registration fees paid at the universities met stiff resistance, notably in the much talked about “Place to be”, the University of Buea. Such programs had already been implemented in private universities and demanded fees more than five those paid at public universities. It should be noted that one of the primary goals of the 1993 university reforms was to:

“Make university programs more varied, professional, adapted and responsive to the needs of the job market by providing more programs that will enable graduates to find jobs in the private sector as well as create self-employment”.

In an interview with The Post newspaper on Wednesday 6th December 2006, the erstwhile vice chancellor of the University of Buea lamented the fact that the university had not received an accord from the minister relating to new professional MBA programs. The cost of the program, circa FCFA 750,000, would have been a response to the needs and demands of big business enterprises in the country. This lack of progress relating to such programs was mainly due to mounting pressure by the government to put a halt to any program that cost a franc above the registration fee. The professionalization of education is an element sacrosanct to the overall improvement of the economic climate and a mega-step in fulfilling one of the major macroeconomic objectives of any nation – FULL EMPLOYMENT. Professionalization of education here means imbedding the course modules in Universities with contents that are reflective of the needs of employers and or the job market as well as the overall technical needs of the economy.

While some state universities have made strides in the provision of professional education(University of Douala with its Institut Universitaire De Technologie De L’Université de Douala, University of Dschang with its School of Agronomy), this form of education is mainly seen at private universities within the country. The success rate of professional programs has been formidable; more than 85 percent of graduates getting work within the first year of graduation versus graduates of non-professional programs who find it difficult securing paid jobs after completing their studies. The majority of the programs of most state universities have few links to the needs of the labor market and, according to the World Bank Human Development Network report, the private sector is minimally involved in the design of university programs and the curriculum contents in Cameroon. The report states that the education system of the country is rooted in the traditional Francophone African model, tilting towards the production of civil servants. It is no longer in sync with the needs of the economy in this era of «…shrinking public services nor international best practices.» Hence, there is a call for a constructive reformation which involves all stakeholders.

Most state universities, compared to their private counterparts, are under-equipped in terms of classroom infrastructure and modern libraries. The student-lecturer ratio is highly skewed to the disadvantage of the students. Lecture halls are overcrowded with as many as 1000 students scrambling for as little as 700 seats. The implication is that the lack of one-to-one encounters result in unsolved study-related problems. Additionally, unlike their private counterparts, state universities have limited internet connectivity, making research and access to useful online material difficult. In an information age where decisions are made in real time and based on analysis of life streaming data, the one thing an institution of higher learning cannot afford to be lacking is uninterrupted internet connectivity.

Given all of these public university shortcomings, the less-than-perfect private sector has been able to fill the gap in the development of the relevant human capital with highly sought skills both within and out of Cameroon. This is a clarion call for action on the part of the state to make the necessary reforms. Improving the quality of education in Cameroon will go a long way to set not just the country’s standard but the standard for other nations of the region; The response to the needs of both government and private enterprises. Actions such as, but not limited to:

– Professionalize all state university programs not only in name and but course contents.

– Liaise with the private sector; formulate and shape course content for different programs with consideration to areas of interest.

– Establish partnerships with reputable universities, both within Africa and out of Africa, and promote the development of exchange visits by lecturers. This will help improve teaching methods.

– Establish a Public-Private partnership whereby students will be required to undergo internships in private companies. Students will gain specific job skills that are directly transferable to paid employment upon graduation.

– Promote the April 2001 National Assembly law which called on Private enterprises and public organs to work together to provide coordinated training opportunities for students beyond the secondary school level of education.

– Finally, in the words of Professor Michel Tchotsoua during a recent symposium on industrialization in Cameroon organized by the Foretia foundation (held on April 21, 2016), the strategy of education has to be …”Formation Opérationnelle”, Stakeholders take into consideration current projects going on within the economy, as well as long term labor needs, before forming modules of university courses. By doing this, in the long term, there won’t be any need to hire foreign experts to execute or maintain projects in Cameroon. These jobs will be done more cost effectively by Cameroonians.

It is only when the government considers and acts on these suggestions and those of from studies of other international bodies that public sector education will begin to be representative of what it is intended to be the human capital needs of the job market within and beyond Cameroon.

Nsaikila Melaine Nyuyfoni is an Economic Policy Analyst at the Nkafu Policy Institute, a Cameroonian Think-Tank at the Denis & Lenore Foretia foundation. He can be reached at: [email protected]