Divisibility of the Franc CFA and Impact on Market Transaction: The Case of Cameroon

Home/General, Policy/Divisibility of the Franc CFA and Impact on Market Transaction: The Case of Cameroon
Previous Next

Divisibility of the Franc CFA and Impact on Market Transaction: The Case of Cameroon 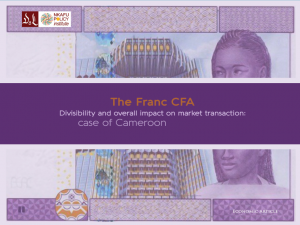 [dropcap type=”circle” color=”#FFFFFF” background=”#8C212A”]M[/dropcap]oney is a means to trade controlled by the Central Bank, and which fills in everyday life three functions. It is any substance that functions as a medium of exchange, a measure of value and a store of value. In other words, for something to function as money, it must be accepted as a medium for the payment for goods and services, it must be a common denominator that can be used to express worth in terms that are generally understood, and it must also possess the quality that retains purchasing power until needed. To be able to provide these basic functions, there are certain qualities that good money must possess. Portability, durability, divisibility, scarcity, acceptability and stability in value are quintessential qualities for good money; deficiency in any of these qualities tremendously slows down business/Market transactions and lowers the velocity of money.

The functionality of money cannot be emphasized without a mention of the framework within which this substance functions – the Market –. We define Market as a medium through which buyers and sellers interact and facilitate the exchange of goods and services. This implies therefore that in a market environment, money exchanges hands as market participants give or take money in exchange for a good or service. For such a process to timely and efficient a key feature of money comes into play – The divisibility of money – and we will focus on the Franc CFA, its divisibility and the overall impact in facilitating economic transactions within Cameroon. The Franc CFA was created on 26th December 1945, in the wake of the Bretton Woods Conference, in order to cushion the colonies from a strong devaluation of the franc. The Franc CFA serves two monetary communities namely:

1) The Western African Economic and Monetary Union (WAEMU). The issuing institution is the Central Bank of West African States and

However our focus is on the Central African Franc which is used in Cameroon. The Cameroonian economy requires that small denominations are readily available and in sufficient quantity to freely cover the desired transactions by agents. Therefore, the divisibility of the Franc CFA is important on market transaction given the fact that the money should be easily divisible into smaller units that people can use only as much as needed for any transactions.

The new range of coins includes:

The divisibility of the Franc CFA, especially for 5,000 francs and 10,000 francs, problematic at this time due to the scarcity of the small units. The circulation of high-denomination notes raises an exchange problem on the Cameroonian market. Some sellers refuse to give change to consumers when they buy an item using a note of 5,000 francs or 10,000 francs due to lack of small denominations. Creating change for a note of 10,000 CFA francs has become difficult and painful in commercial transactions. It is not uncommon to see an individual, with a note of 10,000 FCFA in hand, wander from one shop to another in search of change. «When you have such a note of 10,000 francs CFA or 5,000 CFA francs, you can make several turns without finding a seller who agrees to provide change,» said one consumer. Same situation for seller: «the rebate is often the problem, including when a customer is in possession of a note of 10,000 CFA francs or 5,000 CFA francs.» Commercial banks also report being out of stock, turning attention to the Bank of the States of Central Africa.

The most solicited areas by the holders of large notes include, but are not limited to, petrol stations, major shopping centers, and travel agencies. The scarcity of smaller notes and difficulty making change for the FCFA 10,000 and FCFA 5,000 has triggered a parallel activity around shopping centers in Yaoundé and other large cities in the country. At Casino supermarket, in the city center of Yaoundé, young men stationed at “strategic” corners engage in the activity of change-making. According to several testimonies, to change a note of 5,000 or 10,000 CFA francs, the customer is obliged to pay a «service fee» of 100 to 200 CFA francs.

For some Cameroonians, the scarcity of small units is caused by certain agents. They point an accusing finger at gambling halls. «Go into casinos and other gaming rooms and you will find coin bags,» says Alex, a shoe salesman in Mokolo market. Other testimonies accuse jewelry manufacturers of using particular yellow coins for making rings and other jewelry. They stockpile coins and small notes to sell illegally. These observations raise questions such as: What are the consequences of such a situation on market transactions? What solutions can be suggested?

• Slowdown in the velocity of money

• Loss of government revenue. Since these businesses pay taxes to the state as a percentage of their revenues, a loss of revenue implies less taxes collected. Additionally, the illegal activity of charging «service fees» of FCFA100 to 200 for change isn’t taxed by the state. Profits accrued by perpetrators are not included in national income accounting.

• Slowdown in sales: many sellers see their daily income reduced because they are unable, in the course of a day, to provide change for the large notes presented by customers.

• Increase of the purchase cost: Consumers spend more than expected. Consumers, with 10,000 francs notes are forced to spend a percent or more of what they had planned to spend.

• Creation of change reserves: the State could consider creating exchange agencies in cities. These agencies would play a major role in change-making, and facilitate transactions. • Best supply system of bank ATM: banks would fill their ATMs with small denominations. This would allow employees to withdraw money in small denominations.

• Development of a new purchasing system: banks should develop a card system for making purchases. Equipment would be installed in a variety of shops and locations. This system will help to save time and avoid using big banknotes.

• The government should institute a financial security system to fight illegal selling of money.

The purpose of this article is to investigate the problems related to the divisibility of the CFA franc, in particular large banknotes of 5,000 and 10,000 francs; the consequences of this situation on the economic transaction and the solutions that can be implemented to deal with these problems.

Notes of 5,000 francs and 10,000 francs cause a number of problems relating to the transactions between economic agents: slowdown in the velocity of money, slowdown in sales and increase to the purchase cost. Exchange problems of these large notes have created an illegal «money-selling» market.

Solutions must be introduced and implemented to facilitate economic growth. Suggestions have been made in this regard, such as: the creation of exchange reserves, a better supply system for ATMs, and a better system of partnership between the Central Bank and commercial banks. Lastly, a financial security system should be put into place to protect consumers from the illegal sale of money.