What Contribution Does Bilateral Cooperation have on Good Governance in Cameroon

Home/General, Policy/What Contribution Does Bilateral Cooperation have on Good Governance in Cameroon
Previous Next

What Contribution Does Bilateral Cooperation have on Good Governance in Cameroon 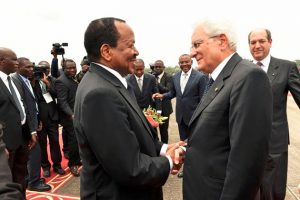 According to several reports on Africa’s development, in the manner of the UNECA’s Economic Report on Africa 2012: Unleashing Africa’s Potential as a Pole of Global Growth, many socio-economic issues faced by African countries are attributable to poor or inadequate governance. Undeniably, this also applied to Cameroon.

To use the words of the Growth and Employment Strategy Paper (GESP), improving governance is one of the major challenges Cameroon faces to its goal of becoming an emergent country, democratic and united in diversity by 2035. The government has been engaged for many years in that way. It defined a strategy through the National Governance Program in 1999 whose objective is to establish an environment of good governance based on the strengthening of the rule of law, improvement of institutional efficiency, good management of public resources and improvement of the participation of population in public affairs. These are essential factors for sustainable development in Cameroon. More significantly, efforts made in all sectors require to meet good governance principles in order to be more effective and generate rapid economic growth. This is especially true with the exploitation of natural resources. Here, we will focus on bilateral cooperation and investigate how much it responds to improved governance in the country.

To achieve its development vision, the Cameroonian Government relies, among other strategies, on bilateral and multilateral cooperation. The country maintains consistent relations with a large and diverse pool of development partners, traditional as well as new ones. As a result of this cooperation on economic plan, a large number of projects have been conducted in various areas in Cameroon such as the well-known Memvélé dam.  This infrastructure is funded jointly by China Eximbank (a loan of about 243 billion CFA francs), the African Development Bank (112 billion CFA francs) and the State of Cameroon (65 billion CFA francs); and will go a long way in reducing the country’s energy deficit.

Contrary to multilateral cooperation where policies are more the outcome of negotiations than the reflection of the preferences of each party involved, partners or donors have greater latitude in setting their agenda in bilateral cooperation.  In this regard, bilateral cooperation allows more easily each country to define its priorities and good governance is often a favorite domain of intervention in Cameroon and/or a key condition to attract investments.

Aimed at the efficient use of resources, good governance addresses issues such as democracy, human rights, poverty reduction, fight against corruption, public financial management, gender equity, and good judicial system to name a few.  The aforementioned topics are considered, by some bilateral partners, as a main mission of their development agency. As an example: The German cooperation agency (GIZ) in Cameroon has supported, through its program called PADDL, the process of decentralization and local development in many municipalities in Cameroon, financing at ten million Euros (6.5 billion FCFA) the Special Fund Inter-Municipal Equipment (FEICOM) in 2010. For its part, one of the main interests of Canadian bilateral cooperation with Cameroon for many years was to yield tangible benefits in strengthening civil society organizations.

Others countries have made the defense of human rights or the fight against corruption their priorities in bilateral cooperation with the country. For the United States of America, improving governance in recipient countries has been made a pre-requisite for increasing development aids or intensifying trade collaboration according to their foreign policy interests. This is through the African Growth and Opportunity Act (AGOA), which aims to encourage African exports to the United States. The requirements for getting involved in the AGOA include, but are not limited to, human rights, business climate and democracy. The Cameroonian government intends to make every effort to take advantage of AGOA provisions that offer export opportunities, especially for textile and cultural industries. This implies the required conditions have to be put in place in order to benefit from this international trade.

These are just few cases where the dynamics of bilateral cooperation in which Cameroon is involved contribute to strengthen some aspects of good governance in the country. However, issues of good governance do not have the same importance for all international actors or at least, cooperation can continue to be beneficial for both parties without emphasizing particularly on this issue.  Among Cameroon’s new development partners, China’s engagement has been one of the most extensive. We note that the cooperation between Cameroon and China has grown enormously and unexpectedly over the past decades. According to some observers, China has become one of the largest partners of the country. The two sides have conducted fruitful and effective cooperation in economic, social and technological fields. From sports infrastructures to those linked to hydroelectric production, China provides aid and investment to Cameroon without focusing on democracy or others issues. This does not mean that China has no vision. In its Africa’s Policy Document, China intended to promote a win-win exchange. The principle included sincerity, friendship and equality, mutual benefit, mutual support and close coordination, learning from each other and common development.

To conclude, it can be said that whether as a pre-requisite or as a simple component of their foreign policy, several countries with which Cameroon maintains bilateral relations are involved in improving good governance in its various aspects. This is actually beneficial for each party. Beneficial for Cameroon in the achievement its development objectives since there is a nexus between good governance and development. Beneficial for development partners since they need safer environment and stability for their investments and interests.

Annette Mogoum is a Development Policy Analyst at the Nkafu Policy Institute, a leading Cameroonian think tank at the Denis & Lenora Foretia Foundation. She can be reached at [email protected]