Home/General, Policy/Gambia’s elections give hope for Africa’s democracies
Previous Next 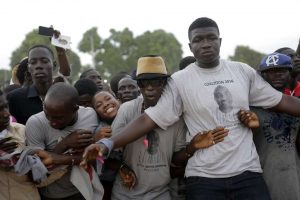 Gambia, last week, shocked the world when its brutal dictator of 22 years, President Yahya Jammeh, lost a bid for a fifth term in what was widely considered a free and fair election. What is even more astonishing is that President Jammeh has conceded the results and is paving the way for the first democratic transition since 1965. Very few would have contemplated such an outcome late last week as Gambian citizens prepared to head to the polls.

Yahya Jammeh, after all, is a brutal dictator with an abysmal record rife with arbitrary detention, torture, forced disappearances and severe human rights violations. His grip on power was absolute and he once boasted that “If I have to rule this country for one billion years, I will.” He even claimed to have discovered a herbal cure for HIV/AIDS which, apparently was only effective on Thursdays.

The victory by his challenger, Adama Barrow, was no accident. The 51-year-old property developer was chosen as the consensus candidate by a group of political parties that joined forces for the very first time. The opposition parties seem to have channeled the deep frustrations of the Gambian people, who earlier this year braved the repressive regime to take to the streets in massive protests.

This is in line with a recent trend in African politics, where independently wealthy barons are increasingly venturing into the political space; not to support the incumbent but as opposition candidates. Their personal wealth has served to minimize the usually large gap in campaign funding between the incumbent ruling party and the opposition. Such was the case in Benin, where the cotton baron, Patrice Talon, mounted a successful challenge to the hand-picked successor of President Boni Yayi, former Prime Minister Lionel Zinzou.

The Gambian outcome benefitted from dramatic changes taking place on the continent. Countries such as Nigeria, Ghana, Tanzania, Namibia, Kenya, Zambia, Cape Verde, Mauritius, and Malawi are leading the process of political transition and building strong democratic institutions. These transitions have been greatly facilitated by international trends from the Arab Spring (a series of anti-government protests, uprisings and armed rebellions that spread across the Middle East in early 2011) to the recent wave of populism spreading across Western Europe, Latin America and more recently the United States, with the election of Donald Trump.

Technology continues to play an immense role, linking citizens in remote and geographically distant regions using mobile platforms such as WhatsApp, Messenger and Viber to convey political messages. Africans are increasingly believing in their ability as a people to shape their own futures and elect the government they need. Such was the case in Burkina Faso where the Burkinabe took to the streets, forced the dictator of 27 years from power and prevented his attempt to modify the constitution to allow him another presidential run.

This is not to say that this new wave of popular uprising and peaceful democratic transfer has reached every African country. Just last year the Burundian government forcefully put down an attempted coup and the president won re-election after obtaining approval from the Constitutional Court, allowing him to run for a third term. A highly-contested election in Gabon, between incumbent Ali Bongo and his longtime ally, Jean Ping, has left the country bitterly divided in what can be considered high-stakes palace intrigue. Political discord in the Democratic Republic of Congo has led to the postponement of presidential elections until April 2018 to allow President Kabila to modify the constitution. Robert Mugabe of Zimbabwe and Yoweri Museveni of Uganda remain firmly in control after decades in power.

The situation is no better in my country, Cameroon, where political tension remains heightened as thousands take to the streets to protest systemic discrimination of the predominantly English-speaking regions. The president, Paul Biya, of 34 years has shown no willingness to cede power and the opposition remains in total disarray; stacked with party leaders who themselves have been in power for more than 25 years. The country is increasingly viewed by its citizens as a giant train in perpetual standstill.

Yet the Gambian example and, to a larger extent the Burkinabe experience, is the source of genuine hope, especially for Francophone Africa. While the number of contested elections on the continent has increased in the last decade, considerable effort must be made by institutions to build processes that will ensure credible political transitions. Ghana has been the shining star in the continent since 1992 and I remain very hopeful that the newly liberated Gambia, and other African countries, will emulate this example. The fall of one dictator may seem isolated but, in the context of Africa, a peaceful democratic transition in Gambia is almost a game-changer.

Dr. Denis Foretia is the Co-Chair of the Denis & Lenora Foretia Foundation and a Senior Fellow at the Nkafu Policy Institute. Article first published in The Washington Post