Human Rights and Democracy in Africa: What Role for the Arts?

Home/General, Policy/Human Rights and Democracy in Africa: What Role for the Arts?
Previous Next

Human Rights and Democracy in Africa: What Role for the Arts? 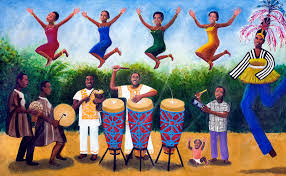 In the past 10 to 15 years, a number of African countries have seen sustained and high economic growth, yet this has not lifted the continent’s inhabitants out of poverty. While poverty has been massively reduced in Asia in the past 30 years—in China and India in particular—50 percent of Africans in 2013 still eke out an existence below the poverty line of $2 per day, just as they did in 1981. Of the 46 countries in the Low Human Development category of the Human Development Index (HDI), which measures health, education, and living standards, 36 are African.

Instead, resource-driven growth in Africa has led to jobless growth, and to the privatization of state assets and enterprises. In line with neoliberal dogma, it has corresponded to rising unemployment in a region where only 28 percent of Africans are estimated to have regular, wage-paying jobs, while the rest make their living in the informal sector.[1] Meanwhile, wealth is increasingly vested in the hands of a politically connected minority and educated elite. A classic example of the growing economic inequality in the region is South Africa, where 20 percent of the population earns 68.2 percent of the national income and the bottom 20 percent earns 2.7 percent.

Given the role of the arts in generating jobs and foreign income for countries in the global north, some African countries such as Kenya, Senegal, South Africa, and Nigeria are embracing the “creative and cultural industries”[2] as new sectors for economic development.[3] But it is unlikely that any one factor alone, driven by any industry, can lead to equitable development. The Arab Spring is a case in point. Tunisia, Morocco, Egypt, and Libya, whose average life expectancy in excess of 70 years compared to Sub-Saharan Africa’s, where the average is 55 years are witnessing massive political change as their citizens have taken to the streets to advocate for access to education, health services, and employment; but also for fundamental human freedoms like freedom of association, freedom of thought, and freedom of creative expression.

Even in the so-called poster countries for African democracy—Kenya, South Africa, Senegal, and Botswana—countries whose regular and relatively free and fair elections are held up as the standard in the region, have high levels of popular unrest. Even there, citizens demand better services and living conditions and oppose with increasing strenuousness the authoritarian means introduced by their elected governments to reduce the transparency and accountability of their leadership.

What, then, are the links between the arts, on the one hand and, respectively, democracy, human rights, development and the eradication of poverty, and economic growth on the other? Which among these are to be priorities? And what is the role of the creative sector generally, and of artists in particular in shaping these priorities?

Economic Growth and the Arts

Creative industries are being “sold” to Africa as a magic bullet[4] that would generate the resources required for broader social and human development on the continent. The fact that industry’s growth was unaffected by the global financial crisis, was further rationale for its push toward Africa.[5] But can the arts be an economic driver that would generate resources required for broader development on the continent? More to the point, is resource-driven growth even what is needed there?

Conditions in Africa are fundamentally different from those of the global north. Poor intellectual property regimes, for example, result in mass piracy and loss of income; markets with disposable income to sustain creative industries are lacking; and infrastructure and expertise are absent at key points in the value chain, such as production and distribution. Furthermore, it is naïve to expect cultural and creative industries to deliver the sort of economic growth that provides mass employment when more traditional economic sectors that have attracted much greater private, international and public investment, have failed to do so.

Relying on the arts to be a driver for economic development is not even good for the arts. The emphasis on those creative industries that have the most potential to generate jobs and sustainable income—like publishing, film, contemporary music, and craft—has meant that other sectors like dance, theatre, and visual arts have suffered official neglect.

In short, emphasis on the creative industries reinforces a neoliberal approach to economic growth which, in the final analysis, benefits—and serves—an elite rather than those who most require developmental assistance in the areas of health, education, and employment, without benefiting the arts themselves.

The Arts, Human Rights and Democracy

International donors tend to designate some fundamental human rights—such as those mentioned above—as “development challenges or goals,” while treating the rights to freedom of conscience, movement, and assembly—as “human rights issues.” Because these are priorities, the right expressed in Article 27 of the Universal Declaration of Human Rights to “freely to participate in the cultural life of the community and to enjoy the arts” is left by the wayside.

For this reason, new initiatives like the Arterial Network are defining development much more holistically than development orthodoxy, as the “the ongoing generation and application of resources (economic, human, infrastructural, etc.) to create and sustain the optimal conditions (political, social, cultural, environmental, etc.) in which human beings may enjoy all the rights and freedoms enshrined in the Universal Declaration of Human Rights.” By this definition, engagement in arts and culture is not simply a luxury for the few, or something to be afforded once other, more important rights having to do with physical well-being are taken care of. Rather, it is a fundamental human right to be made available to all people, to be enjoyed alongside all other human rights and freedoms.

The Africa Institute of South Africa, based in Pretoria, uses the Economist Intelligence Unit’s Democracy Index to identify four types of African governments: full democracies, flawed democracies, hybrid regimes, and authoritarian regimes. Of the 50 rated African countries, only Mauritius is considered a “full democracy,” while 9 countries are in the “flawed democracy” category, 11 are considered “hybrid regimes” (in a state of transition), and more than half are deemed “authoritarian regimes.” Of the six economies this index lists as the fastest growing on the continent, only Mozambique is in the hybrid category, while the rest are all deemed “authoritarian.” [7] This suggests that economic growth and political freedom are not linked positively—not a surprising inference to make.

The practice of human rights, including the right to freedom of thought, conscience and religion, the right to freedom of opinion and expression, and the right to freedom of peaceful assembly and association is not simply about asserting human rights but is also an advancement of democratic practice. Their absence or curtailment limits the participation of citizens in the governance of their lives, in holding public authorities accountable, in exposing maladministration and corruption and presenting alternatives to hegemonic political views, moral values and power relations.

The basic premise of artistic engagement—the freedom of creative expression—is yet another of these rights. It is, therefore, no coincidence that artists align themselves with broader struggles for democracy—as was the case in South Africa in the struggle against the censorial tendencies of the apartheid regime—since the attainment of a democratic state allows the political space in which this and the other freedoms may be exercised without fear. However, even the coming into being of a constitutional democracy where freedom of expression is guaranteed in the Constitution – again, post-apartheid South Africa is a prime example – government and political players continue to threaten its practice when such practice is critical of the political status quo. A recent example was the exhibition by Brett Murray – Hail to the Thief 2 – in which the artist satirizes the ruling party’s selling out of its liberation ideals in favor of get-rich-quick, often corrupt schemes, with leading South African political figures demanded that the work (in particular, one depicting the exposed penis of the country’s president mocking the rape of the public purse) be banned and even destroyed.

Struggles for democracy – as witnessed in Tunisia and Egypt today – are not only about elections every five years, but about the rights of citizens to enjoy their fundamental rights and freedoms on a daily basis, even when democratically elected regimes use their new-found political legitimacy to restrict such rights and freedoms.

It is for this reason too that home-grown groups like Arterial Network seek to organize creative practitioners at national levels, not simply to support individual creativity, but to ensure that the arts community has an organized voice to articulate its aspirations, defend their rights, and agitate for policies and structures that promote and protect their freedoms.

International donors and philanthropists often act and provide support in silos—for example, arts funders customarily fund development, promotion of human rights, the empowerment of women, or climate change. Within an African context, this is a mistake. It is necessary to take a more holistic view of development funding that integrates economic growth, the assertion of all human rights and freedoms, the deepening of democracy, and environmental sustainability.

Rather than the simple instrumentalization of the arts for economic growth or social development, efforts should be geared towards making the fundamental human right of all to participate in, and enjoy the arts a reality and in so doing contribute to economic development, social cohesion, and to the assertion of democracy and human rights.

Such activities include building capacity and training leadership in the African creative sector, individuals who will have the organizational skills, the political know-how, the policy tools and the confidence to be able to build and sustain their respective creative sectors. Artwatch Africa, a nascent Arterial Network project, monitors the contravention of freedom of creative expressions in all African countries. The contribution of the arts to economic growth is developed through cultural entrepreneurship training, but it is also interrogated through annual creative economy conferences that apply theory to varying African conditions. Building sustainable arts organization and providing relevant and up-to-date information are key to effective advocacy at national, regional and international levels, and the Network has made significant strides in this regard.

Currently, it is primarily international funding partners who support this multi-faceted vision, but efforts are under way to increasingly seek African resources to build and sustain a pan-African network of artists, cultural activists, creative enterprises and cultural NGOs. This is precisely so that individual practitioners may give creative expression to their views and insights, under the protection of national, regional and international networks that advocate, resource and defend such creative expression in the broader promotion of democratic societies.

Original posting can be accessed at: http://bit.ly/16p5zi0