HIV AIDS IN CAMEROON – AN UPDATE

Home/General, Health, Policy/HIV AIDS IN CAMEROON – AN UPDATE
Previous Next

HIV AIDS IN CAMEROON – AN UPDATE 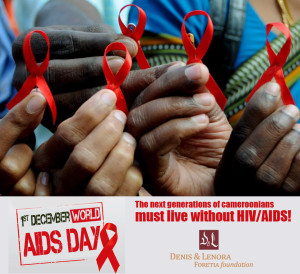 [dropcap type=”circle” color=”#FFFFFF” background=”#8c212a”]T[/dropcap]hirty years after the discovery of AIDS, the infection has continued to grow and make victims worldwide. World Health Organization (WHO) identifies it in 2002 as a global pandemic, as nearly 30 million people have died from AIDS since it was discovered. According to the UN mission (UNAIDS), approximately 34 million people are infected in the world today and each year nearly 3 million new cases are diagnosed. In addition, nearly 90% of HIV-infected children in 2011 are found in sub-Saharan Africa. Such statistics are frightening and give to understand that continents are not equal before the pandemic.

As a reminder, the human immunodeficiency virus (HIV) is a retrovirus that attacks the cells of the immune system which it destroys or renders ineffective. In the early stages of infection, the subject does not exhibit symptoms. However, the evolution of the infection leads to a weakened immune system and increased susceptibility to opportunistic infections. Acquired immunodeficiency syndrome (AIDS) is the final stage of HIV infection. Antiretroviral help slow its progression. HIV is transmitted during unprotected sex, transfusion of contaminated blood or sharing contaminated needles. It is also transmitted from mother to child during pregnancy, childbirth or breastfeeding. The Following figure shows details on the distribution of the number of people living with HIV worldwide. 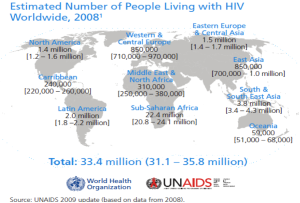 Sub-Saharan Africa is the region of the world most affected by HIV / AIDS. The pandemic continues to spread worldwide; despite prevention efforts and successes of a few countries, commitments and continuous investments are still needed to support comprehensive approaches needed to improve sexual and reproductive health. Sub-Saharan Africa continues to bear a significant load of HIV patients. In mid-2010, 68% of all people living with HIV resided in sub-Saharan Africa, a region that represents only 12% of the world population. In 2009, one third (1/3) of all people living with HIV worldwide resided in the 10 countries of Southern Africa (South Africa, Angola, Botswana, Lesotho, Malawi, Mozambique, Namibia, Swaziland, Zambia and Zimbabwe). These 10 countries accounted for 31% of people contracting HIV, and 34% of all people dying from HIV-related reason in 2009 people. The HIV epidemic in South Africa is the most important (UNAIDS 2013).

The AIDS pandemic slows down economic development efforts and erodes the social fabric throughout sub-Saharan Africa. The National AIDS Control Committee/Central Technical Group (CNLS/GTC) estimates that there are 141 new HIV infections per day in Cameroon, which means six newly infected persons each hour, everyday. The main mode of HIV infection in Cameroon is through sexual intercourse. About 90 percent of new infections are estimated to occur as a result of unprotected sexual relations. Multiple partners and non-use of condoms increase the risks of HIV transmission. About 6 percent of new infections are from mother-to-child transmission, and about 4 percent of new infections come from the blood supply and other accidental transmission. The following figure represents the trend in HIV prevalence in Cameroon, observed between 1990 and 2012.

From the 0.5% percentage rate observed in 1990, Cameroon’s share of the population infected with HIV significantly rose over the years and reached a peak in 2003 with an observed 5.3%. This can be justified by the lack of information on HIV/AIDS Cameroonians experienced then. HIV prevalence then started decreasing in 2004, probably due to awareness raise on the pandemic. The following figure provides details on the distribution of HIV prevalence per region in Cameroon. 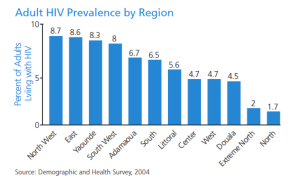 Figure 3 shows that the North-West region is most affected by HIV, followed by the East. Yaoundé and Douala which are respectively the political and economic hubs of the country have both been rightly included, as it is important to observe how such hubs perform in terms of HIV prevalence and the results are alarming. Extreme-North and North regions represent the lowest share of the population living with HIV.

HIV and AIDS critically affect Cameroon’s social and economic development. Regarding the health sector, HIV and AIDS programs’ expenses absorb an important part of the national health budget. Costs for AIDS patients will increase as more patients have access to care and treatment. There is also an increased demand for qualified health professionals who care for AIDS patients and support the national treatment program, shifting personnel from other preventive care and other disease responses. HIV/AIDS also increases poverty level in households, as fewer resources are available for other tasks, such as children’s education. Poverty also arises from a decline in workers’ productivity (CNLS/CGT 2010: 16-17).

In Cameroon, an estimated 4.3% current prevalence rate of the total population. This is one of the 20 priority countries support programs UNAIDS but still ranked countries with generalized epidemics where funding requirements for 2013 amounted to 27 billion CFA francs (54 million U.S. dollars).

CONTEMPORARY STRATEGIES TO FIGHT AGAINST HIV

According to the 2013 annual report of the organization, the number of people infected with HIV has dropped considerably (one third of new infections since 2011). This is a significant progress, although the Millennium Development Goals (MDGs) aim to achieve a drop in half of the infections by 2015.

The world unites yearly in the fight against HIV to celebrate World AIDS Day (1st December), in order to provide information on the status of the pandemic, promote the treatment and management of HIV/AIDS in the world but especially in high-prevalence countries.

The implementation of country-based preventive and therapeutic interventions has made enormous progress. In Cameroon for instance, a National and Strategic Plan to fight against HIV and Sexually Transmitted Diseases (STDs), coordinated by the Minister of Public Health, focuses on individuals that are “most at risk” such as women, youth and disabled people. The National AIDS Control Committee (CNLS) designs strategies to efficiently fight against HIV nationwide. Social Marketing as proved to be efficient especially among the youth, with initiatives such the fun and informative 100% Jeune Magazine, and other initiatives such as Vacances sans SIDA, which is an interactive nationwide campaign that aims to sensitize the youth on HIV issues during the school holidays. The Chantal Biya Foundation is also well known for various actions that aim to eradicate the pandemic, especially in the field of research on HIV.

The remarkable decline observed in the number of new infections is undoubtedly due to the significant efforts on the distribution of antiretroviral therapy, especially among pregnant women. This has really helped to prevent the transmission of HIV to children before birth. With this precaution, nearly 670 000 children, according to the UNAIDS report, were spared between 2009 and 2012. The impact of these efforts is particularly spectacular in some countries of Africa Saharan Africa, with 90% of infected young people.

However, Professor Françoise Barré-Sinoussi highlighted that the prevalence rate is still too high in Cameroon, particularly among women. “Extremely poor Countries such as Cambodia have succeeded in reducing the prevalence of infection due to 90% coverage of antiretroviral drugs”, stated the eminent French scholar.

More than ever, UNAIDS partners are convinced that research funding is the most effective way to reverse or halt the spread of the virus and contribute to achieving the MDGs by 2015. UNITAID therefore launched on September 13, 2013 in Abidjan, a program to measure the effectiveness of antiretroviral (ARV) treatment administered to HIV infected patient in Africa , in order to better treat the infection. This program, called viral load test and its pilot phase will mainly be implemented in Ivory Coast, Burundi , Cameroon and Guinea (UNITAID 2013). The advantage of this test is twofold. It stops the development of the infection, and it allows to identify the best appropriate treatment facing a constantly changing virus. Risks of transmission of HIV will therefore be lowered. Estimated at 2.11 million Euros, this global health initiative which funds are 70% funded by a small tax on airline tickets. This change in strategy is likely ‘to avoid additional 3 million deaths and 3.5 million new infections by 2025’ (WHO 2013). In order to achieve the goal of halving new infections in the most at-risk groups, and to eliminate mother to child transmission in Cameroon, as is the third National Strategic Plan (2011-2015) the number of accredited centres for the distribution of ARVs (currently 155 centres) on the national territory must necessarily increase and continuously provide treatments that comply with innovative methods.

• One of the most important roots of the problem is unemployment and lack of financial security, especially among youth. These phenomena inexorably lead young people, especially girls, to engage in casual sex and prostitution. It is therefore important to integrate in the fight against HIV, strategies that effectively promote employment, especially for youth and women.

• Carelessness is a problem that contributes to the spread of HIV/AIDS. Information about HIV risks being widely disseminated, hence many individuals protect themselves … most of the time. Campaigns should emphasize on the importance of consistent condom use, true mutual fidelity and abstinence, as it only takes one unprotected sexual intercourse with an infected person to contract the virus.

• Carelessness is also a problem when it comes to getting tested for the infection. When mass screening campaigns are launched, many respond to the call but the proportion of those who will withdraw their HIV test results is quite low, this limits the fraction of people who know their HIV status and behave responsibly.

• HIV is not spread solely through sexual contact. It is therefore essential that medical staff ensures that the number of new infections through blood transfusion is nil and that patients receive continuous advice on the subject. Similarly, mothers should be continually monitored to reduce to nil the transmission of HIV from mother to child.

• In the field of research and innovation on HIV, it might be stimulating to involve (reliable) traditional healers in the battle against HIV, as they might make important contributions to the current ways of preventing and treating the infection.

• Focusing on the youth to eradicate HIV might be the best solution for the future. For instance, each child before a certain age should know that he could incur a very serious infection called HIV if he is injured with a contaminated object. Thus, the existence of HIV/AIDS must be present in the mind of young people, in order for responsible behavior to be a reality for future generations across the territory.

In a nutshell, although Cameroon displays a HIV prevalence rate much higher than the 0.8% world average, it is important to note that the number of new infections currently decreases, thousands of people receive treatment, the number of children born HIV-positive is reduced and the country invests more than ever in the response against AIDS. A more efficient allocation of the funds as well as continuous communication on prevention methods is therefore prescribed to reduce the number of HIV infections to zero, as stated in the 2011-2015 World AIDS Day theme: Zero AIDS-related Deaths, Zero New Infections and Zero Stigma and Discrimination.