Non-communicable diseases in Cameroon – A growing threat to human capital

Non-communicable diseases in Cameroon – A growing threat to human capital 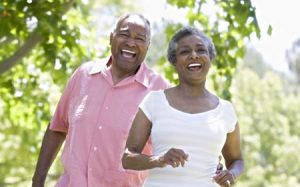 With a GDP of approximately US$ 29.2 billion and a GDP growth of 6.2% in the year 2015 (World Bank 2016), Cameroon, a LMIC (Low and Middle Income Country) with a rapidly increasing population is experiencing steady economic growth. This growth over the last few years has stimulated an increase in urbanization, with 57.6% of the 23.3 million population currently living in urban areas (Echouffo-Tchegui and Kegne 2011). Rapid urbanization and a transition from agrarian life to the wage-earning economy of city life are fuelling a potentially negative impact on health behaviors. These socio-economic changes have exposed Cameroon to the double burden of infectious and non-communicable diseases (NCDs). The increasing urbanization in Cameroon and the swift adoption of a Western lifestyle by Cameroonians are compounding the already increasing burden of NCDs.

The UNDP (2013) place NCDs (cardiovascular disease [CVD], diabetes, cancer and chronic respiratory disease) as the world’s leading forms of preventable illness, as well as causes of disability and mortality – five of the top six causes of death worldwide are NCDs. In 2010, NCDs accounted for two-thirds of 53 million global deaths, killing more people than all other causes combined (UNDP 2013). According to the WHO (2015), NCDs kill, on average, 38 million people each year with CVDs (17.5 million), cancers (8.2 million), respiratory diseases (4 million), and diabetes (1.5 million), accounting for 82% of all NCD deaths. Since the 1990s, the negative impact of NCDs on disease burden has grown, and NCD epidemics are currently a global challenge. In order to highlight the severity of the threat on global health posed by NCDs, the UNDP (2013) states that by 2030, NCDs are expected to be the major cause of death globally and will kill 52 million people per year; a figure five times more than the number of deaths caused by communicable diseases.

NCDs are often misconstrued as a problem of high-income countries. However they place an equal or even greater burden on LMICs (UNDP 2013). Over 80% of countries in Africa are LMICs and this continent is increasingly bearing a significant proportion of the global burden of chronic diseases. Many countries in Africa, especially sub-Saharan Africa, are experiencing an alarming increase in NCD-related morbidity and mortality, with various segments of the population being affected. In their paper on Cardiovascular Diagnosis and Therapy, Tchoumi and Butera (2013) point to projections which predict the largest increase in death rates over the next 10 years in Africa from CVD, cancer, respiratory disease and diabetes. As it stands, almost three-quarters of NCD deaths (28 million) occur in LMICs; 16 million of these deaths occur before the age of 70 and 82% of these “premature deaths” occur in LMICs (WHO 2015). Alarmingly, in developing countries, NCD-related mortality is occurring at earlier ages, affecting more people who are in the prime of their economically productive years; 29% of NCD-related deaths occur before the age of 60.

Africa’s NCD burden has been attributed to several factors including aging, rapid unplanned urbanization and industrialization, increasing food market globalization, and the adoption of unhealthy lifestyle behaviors. Tobacco consumption, sedentary lifestyles characterized by physical inactivity, the harmful use of alcohol and unhealthy diets high in saturated fats, sugars and salt increase the risk of dying from NCDs. These risk factors are not only particular to the older age groups; they affect all age groups, increasing their vulnerability to NCDs. Despite the inescapable nature of these risk factors, they are behavioral and can be modified. Statistics from the WHO (2015) show that modifiable behavioral risk factors play a major role in rising death tolls from NCDs. Tobacco use causes 6 million deaths per year; physical inactivity is attributed to 3.2 million deaths per year; harmful alcohol consumption results in 3.3 million deaths per year; and in 2010, CVD deaths resulting from excess sodium intake caused 1.7 million deaths (WHO 2015).

Cameroon, like other LMICs on the African continent, is currently experiencing an increase in NCD-related deaths.  According to the 2014 NCD profile report for Cameroon, 239,000 deaths were NCD-related and NCDs accounted for an estimated 31% of total deaths that year (WHO 2014). The same report states that there is a 20% probability of dying between the ages of 30 and 70 years from the four main NCDs in Cameroon. This situation could worsen with an increasing population aged 50 or more, and an increase in obesity, diabetes, and hypertension as a result of urbanization and social mobility (Echouffo-Tchegui and Kegne 2011).

In addition to their customary diet which is very rich in starch, oils, and sugars, Cameroonians are now increasingly exposed to contemporary and unhealthy diets. These diets are contributing to the increase in obesity rates. Obesity is rapidly becoming a health problem in Cameroon; this is encouraged by the fact that being obese is still being perceived as a sign of good living because it confers respect and influence (Kiawi et al. 2006). A qualitative survey conducted by Dapi et al. (2010), among Cameroonian adolescents, showed a strong preference for sweetened foods; with a trend showing a transition over time from a traditional diet in rural areas to a more westernized diet characterized by processed foods and sweet beverages in urban areas. This is not a problem limited to urban areas; the adoption of unhealthy lifestyle behaviors that lead to NCD has been emerging in rural areas as well.

Tah Tabod is a health policy analyst at the Nkafu Policy Institute, a Cameroonian think tank at the Denis & Lenora Foretia Foundation. He can be reached at [email protected]