Corruption-Free Cameroon! Is it Possible?

Corruption-Free Cameroon! Is it Possible? 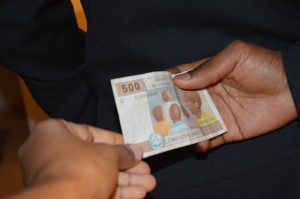 If being corrupt were a virtue, Cameroon would definitely be amongst the proudest of nation states. Unfortunately, corruption is a vice that needs to be fought with the most stringent of measures given the negative impact it has on economic growth, development and the socio-economic wellbeing of citizens.

Topping the list as the most corrupt country in the world for two consecutive years (1998 and 1999), one could literarily, no pun intended, refer to Cameroon as the Harvard of Corruption. Despite the prevalence of corrupt practices in the country, it wasn’t until January, 2006 that the government, through the National Anti-Corruption Commission known by its French acronym CONAC, launched the much talked about “Operation Sparrow Hawk” to clamp down on corrupt practices within the country. Since the emergence of the much felt but invisible “Sparrow Hawk”, several individuals, most of them top administrative officials and government ministers, have been arrested, tried and slammed with heavy prison sentences for mismanagement and/or embezzlement of exorbitant amounts of state funds. This, however, has done little to deter corrupt practices within government circles, leaving the country no better today than it was 10 years ago.

We take a look at the statistics

Since 1998, the corruption perception index (CPI) score of Cameroon has averaged a meager (2.23) on a scale from 0-10, with 10 representing no corruption and 0 implying that the country is very corrupt. As seen on the graph below, Cameroon’s CPI score has ranged between 1.4 and 2.7. Even though Cameroon’s ranking has improved over the years, the results may be due to an increase in the number of countries being surveyed or that some countries become more corrupt rather than Cameroon experiencing an actual reduction in corrupt practices. 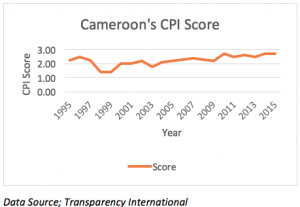 According to the World Bank’s enterprise survey for Cameroon, corruption is 5th among the 10 major business environment obstacles for firms, with over 7% of firms listing corruption as a major obstacle.  28.2% of all public transactions, as of 2009, required a gift or some sort of informal payment; over 51.2% of firms expected to give gifts to public officials to “get things done.” For public contracts, a contractor is expected to give gifts that average about 6% of the total contract value. For crucial amenities like water and electricity 31.6% and 22.3%, respectively, of firms expected to give gifts to get a connection for these amenities. With a depth of corruption as expressed by all of these statistics, the pace of business creation is slow and the rate much lower than that of business closures. This implies more businesses are closing down than are being created. The business anti-corruption portal reports that the endemic nature of corruption in Cameroon “significantly increases the cost and risks of doing business” and that the “insufficient implementation of anti-corruption legislation, coupled with impunity among public officials, leads to very high corruption risks across all sectors.

As of 2015, Transparency International reported that the police and taxation departments are the most corrupt institutions in Cameroon. To put things into perspective, we take a look at what could be referred to as CONAC’s delivery of a two-year-old baby: that is the National Anti-corruption report for 2014 which was released on Monday 27th of June 2016. Even though late, this report paints a picture of the situation in the country and points to the direction we are headed if the government doesn’t get tougher on corrupt practices and corrupt institutions. The report reveals the embezzlement of exorbitant sums of money through unexpected public contracts, unjustified payment of mission allowances, irregular payment of bonuses, double payment practices, unjustifiable expenditures unrelated to projects, value-added tax paid to project funds and fake checks paid to disaster victims.

The report states that an astounding sum of 14,743,183,736 FCFA was embezzled in the management of the compensation funds for the Nsam disaster victims. Also, through an overvaluation of crops and projects, the state lost 1,792,399,619 CFA, representing 64% of compensation within the framework of the Memve’ele hydroelectricity dam construction project. These figures only reveal to us that the Natural Rate of Corruption (NRC) in Cameroon is shockingly high and unacceptable. It is a deterrent to investment and thwarts the economic progress of the nation.

With such reports, one could only fantasize about a corruption-free Cameroon and debunk the feasibility of such a Cameroon ever coming into existence. This however, is a call for a change of strategy on the part of the Government. Not only should the objective be focused on the arrest of corrupt individuals, but a comprehensive mechanism should be put in place to track public finances and block the loopholes through which unscrupulous individuals take advantage of the weak financial system.

An independent anti-corruption squad should be formed to work hand-in-glove with CONAC to track down and prevent bribe schemes before they are executed.

Finally, computerization of the anti-corruption framework would definitely be more efficient in dealing with corruption issues. Criminals are getting smarter by the day; we as a nation have to implement smarter strategies to track them down. With these in place, the Natural Rate of Corruption within the country will be tremendously reduced to an acceptable figure. Until then, the reactive measure by the government in the fight against corruption will continue to be exploited by some who seem undeterred and persistently pilfer huge sums of funds from state coffers.

NB: The NRC is just a term I coined as I wrote this short note. It could be an index that measures the corruption rate in a country, taking into consideration all the different indices provided by the Enterprise survey of the World Bank.

Nsaikila Melaine is an economic policy analyst at the Nkafu Policy Institute, a leading Cameroonian think tank at the Denis & Lenora Foretia Foundation. He can be reached at [email protected]