Only a transitional government, without Biya, can save Cameroon

Home/General, Policy/Only a transitional government, without Biya, can save Cameroon
Previous Next

Only a transitional government, without Biya, can save Cameroon 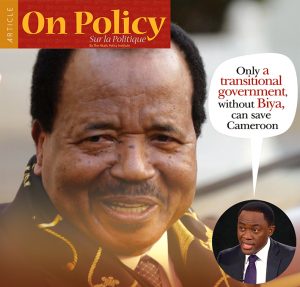 My country, Cameroon, is in the process of committing suicide. Compare the country to a large truck racing down a highway-running on flat tires, the gas gauge a hairline away from Empty, with an engine about to seize.  The driver ignorant of the whys and wherefores of making the repairs.

The Anglophone crisis that has engulfed the country for the past six months, with no end in sight, has dealt the final blow to this truck. It has brought, front and center, fundamental and historical conflicts; it has accentuated the various malaises threatening to tear the country apart.

Long before the current Anglophone uprising, the country was already in severe decay. Cameroonians have no trust in President Paul Biya and his government. This lack of trust permeates all levels of the legal system, leaving ordinary citizens essentially hopeless. With no trust in the legal system, mob justice is now increasingly becoming the norm. The anger of Cameroonians is palpable in the political space. The ruling party has loaded the system to the point where nobody expects political changes to come through the ballot box. In fact, if Barack Obama were a presidential candidate against 84-year-old Paul Biya, he would lose spectacularly under the current rules. After all, this is a country where 18-year-olds can fight and die as soldiers but they must wait until they are 20 to vote.

The current crises are further exacerbated by an already dismal economic outlook. The price of oil and other commodities are not expected to rebound anytime soon.  The country cannot increase its foreign reserves through exports as its currency, the Franc CFA, is too strong and its monetary policy is practically dictated by the French government. The interruption of internet services in the Anglophone regions has ensured that foreign direct investments will decrease significantly as investment decisions are postponed or cancelled entirely given the increased political risk in the country. The country, to be clear, is in perpetual crisis.

Many countries that have found themselves in a similar situation have seen violent popular uprisings. Times like these require a great degree of selflessness. When things fall apart and the center can no longer hold power, we are all called upon to act in the best interest of the country. Only a transitional government can prevent a rebellion in the very near future, and lead to the creation of a genuine foundation for social cohesion.

What kind of transitional government?

The country faces a very stark choice: continue on the current path and implode or build a new, pluralistic and democratic Cameroon in which every Cameroonian will be safe, comfortable and valued. For those of us who want Cameroon to survive these crises without plunging into violence, we must strongly fight for a real transitional government.

Such a transitional government should have a mandate for three to four years and must be led by technocrats trusted for their leadership, strong moral compass and experience. It must not have any politicians. The first and most pressing objective must be to ensure freedom of speech and freedom of the press. The second priority must be to enforce an equitable justice system. No one should be above the law and the law must be fairly applied. Magistrates and the police must uphold the law stricto sensu, strictly speaking. While a new National Constitution must be deliberated, it would be extremely important to respect the current legal frameworks. The transitional period must be the time to build trust in the country’s institutions.

There can be no elections until the central question of “the type of government” has been properly debated and resolved. A federation or a confederation. This discussion must occur in a representative Constitutional Convention but it should not and cannot end there. Cameroonians must talk and listen to each other. Anglophones and Francophones. Those from the north, south, east or west. This is the only way to build a country of unity. A genuine national discussion may convince a majority of Anglophones not to pursue separation, despite their legal right to do so…

Dr. Denis Foretia is a surgeon and the Co-Chair of the Denis & Lenora Foretia Foundation. He is also a Senior Fellow at the Nkafu Policy Institute