Malnutrition – Agony Alongside Abundance in Cameroon

Home/General, Health, Policy/Malnutrition – Agony Alongside Abundance in Cameroon
Previous Next

Malnutrition – Agony Alongside Abundance in Cameroon 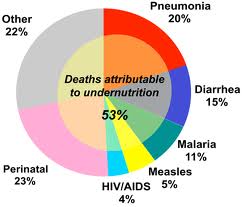 Under Five (5) Mortality in Cameroon

Garoua — Despite fertile lands, malnourishment is rife in the north of Cameroon. Political prioritization and investment are crucial and urgent. Cameroon, with its abundant rainfall and fertile lands, is widely renowned for its enormous agricultural potential. But at the same time, 33% of children under the age of five in Cameroon suffer from malnutrition, and 14% from extreme malnutrition. This deteriorating and protracted crisis has placed Cameroon in the lower echelons of global malnutrition lists for several years, alongside far less resource-rich nations such as Chad and Niger.

“Cameroon has been in the red-list for a long time”, a nutrition expert at UNICEF told Think Africa Press under the condition of anonymity. “We have evidence from our latest surveys in 2011 that the rate of stunting or acute malnutrition is going up.”

However, hunger and malnourishment in the country is not evenly distributed. Statistics indicate strong contrasts between the mild prevalence of malnutrition in southern parts of the country and more extreme cases in the Sahel and drought-prone northern regions on the fringes of the Sahara Desert.

The Adamawa, North and Far North regions are the most severely affected, and are home to millions of Cameroon’s children. From early childhood onwards, these children face assorted hardships such as restricted access to safe drinking water and sanitation, recurrent floods, cholera outbursts, frequent crop failures and the threat of famine. These hardships contribute to malnutrition but are not always associated with just a straightforward lack of food.

The main market in Garoua, the headquarters of the country’s North Region, located around 1,000 kilometres from the capital Yaoundé, is well stocked with food crops. Vegetable vendor, Mohamadou Sarli Yakubu says copious harvests in the country’s south guarantee supplies for about three months per year.

“During the rainy season, we ensure adequate stocks of cabbages, carrots, lettuce, avocadoes and potatoes among others from the country’s south. The bulk of my customers are salaried workers. The vegetables are too expensive for the poor masses. Costly transportation and exorbitant taxes result in the high prices”, he explains.

During the dry season, these supplies run thin and become more expensive. “Sometimes we go for a whole month without vegetables”, says Yakubu. Problems such as a lack of infrastructure and high prices means a balanced diet is beyond the means of many. And diets deficient in vitamins, minerals and adequate calories has led to malnutrition.

A stones-throw away from the market is Garoua Regional Hospital. Its pediatric ward is fitted with a ten-bed integrated treatment centre, which was set up in 2009 to provide free medical intervention for malnourished children and infants, with support from UNICEF.

“Since it was established, malnutrition-related deaths have considerably dropped from an average of six per month for every thirty registered patients”, says Amadou Alouk, one of the centre’s only two assigned nurses. “Unfortunately in June, we recorded six deaths. Most are children of the poor who cannot afford proper medication, rely on traditional medicines or come for treatment too late.”

Alouk’s account is suddenly interrupted by a cluster of wailing women. One of them, Tchinakoui Rebecca, a 34-year-old mother of four has just lost a baby.

“I don’t know what killed him. All I know is that he had stomach pains”, she says tearfully.

Medics say the two-week-old died from diarrhea, a leading cause of malnutrition in a place where open-air defecation is the norm. The short-lived newborn is among the 12.5% of Cameroon’s under-fives that die every year as a result of malnourishment or its corollary effects. Alongside stunted growth, survivors are often left with anaemia, underdeveloped intellectual capacities, visual impairment, and are more susceptible to infections.

A key component in development

For a long time, the Cameroonian government has done little to combat malnutrition and relied heavily on external actors to deal with the problem. This lack of political involvement appears to have been deeply misguided. As well as having a deep responsibility to care for its people, the Cameroonian government also ought to have recognized that malnutrition plays an important role in the country’s development more broadly. Healthier citizens would boost the workforce and ease the burden on systems of healthcare. Malnutrition drains household incomes and deeply damages productivity. It is promising therefore that this March, the government demonstrated some degree of political will by adhering to Scaling Up Nutrition (SUN), a new global grouping of 40 countries aimed at scaling up nutrition through a multi-actor and stakeholder approach.

If this spurs action, it could prove significant in tackling malnutrition, and there is indeed plenty the government can and should do. In the short-term, the provision of supplementary, fortified and ready-to-use therapeutic foods can help. Meanwhile, a more comprehensive examination of the roots of malnutrition is crucial, improved healthcare is necessary, and better education of issues around health and nutrition can contribute to change from the bottom up. Cameroon has a lot of catching up to do when it comes to tackling malnutrition. And millions of Cameroonians have been waiting long enough.

Ntaryike Divine Jr. Ramzi is a renowned journalist and alumnus of the International Visitor Leadership Programme. He is the Voice of America correspondent in Cameroon and a stringer for several news outlets including the Associated Press, Science and Development Network, Think Africa Press and Africa Report. He was awarded Cameroon Journalist of the Year in 2009 and Best Discovery Story in 2010. Ramzi graduated in October 2012 with a distinction in Science Journalism Cooperation.