Is Zika Worse Than The Ebola Epidemic?

Is Zika Worse Than The Ebola Epidemic? 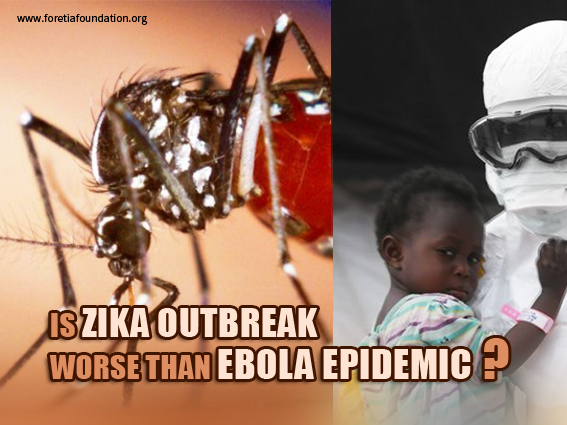 A committee of the World Health Organi- zation has declared the Zika virus a global public health emergency. This designation gives WHO and member states the ability to recommend limits on travel in an effort to prevent the potential spread of disease, as well as being empowered to call for emergency measures and resources to combat an outbreak. The last time WHO used this mechanism was during the recent Ebola crisis in West Africa. Several health experts claim that the Zika virus outbreak in Latin America could be a bigger threat to global health than the Ebola epidemic in Africa. But Zika differs considerably from Ebola.

Ebola causes vomiting, fever and excessive bleeding; the outbreak warranted the rapid development of treatment centers, safe burial practices and strict infection control protocols. On the other hand, only one in five of those infected with Zika experience flu-like symptoms, which rarely require hospitalization. Although the main concern related to Zika is microcephaly of the new born when pregnant women is a infected, the casual link is still to be established between the two.

In January 2016, the US Centers for Disease Control and Prevention issued a travel alert: American women of childbearing age, whether pregnant or not, were told to avoid countries where the Zika virus has been identified. At the same time, women in countries that already have Zika outbreaks have been told to avoid getting pregnant. The profound involvement of health organizations in a climate of uncertainty should not create the perception that the Zika outbreak is worse than the Ebola outbreak. Rather, the involvement of health organizations, WHO especially, should be seen as a desire to learn from prior failures connected to Ebola, including a slow response to the outbreak.

Should we compare Zika and Ebola Crisis?

Zika has received considerable global attention. Notably, there has been a growing conversation focused on the failures of the global health community during the Ebola outbreak in West Africa, and applying these lessons learned to the Zika outbreak in an effort to ensure that this virus doesn’t become the next global health threat. While this comparison may be understandable, it ignores the basic fact that Zika is a very different disease than Ebola and warrants a different policy response.

Ebola inspired fear in the public due to violent symptoms, rapid and uncontrollable spread, high case fatality and the lack of a viable cure. Quite simply, Zika does not pose the same security concern to the global population that we saw with Ebola and it should not be considered a threat in the same way. This is despite the US Centers for Disease Control now placing the virus at Alert Level Two. Zika spreads through mosquito bites, rarely requires hospitalization and has an extremely low mortality rate. The virus can be readily controlled through e ective mosquito control procedures, such as destroying the infected insects and larvae, or insecticide use. Zika is simply a disease similar to other neglected tropical diseases such as Malaria. Better understanding of prevention and treatment mechanisms for mosquito-borne diseases will prepare countries to respond and prevent such diseases.

As is the case with other outbreaks, politics will have the final word in the control of Zika. However, we should steer the conversation to the positive steps that can be taken to combat mosquito-borne diseases in a comprehensive manner. Classifying Zika as a global security threat may result not only in panic but in potentially unsuitable responses.

We are not suggesting that Zika should be ignored, nor should there be resistance to seeking to protect unborn babies from potential harm. Simple measures such as mosquito-treated nets, cleaning of neighborhoods, and other environmental activities supporting the reduction of mosquito breeding sites in outdoor/indoor areas would be more effective than the prospect of a vaccine for Zika. When we consider the added problem of trying to develop a vaccine that would have to be tested on pregnant women, we may be facing a practical and ethical nightmare.

In conclusion, the security response that we witnessed during the Ebola outbreak would not be suitable to halt the spread of this mosquito-borne disease. However, a key lesson learned from the Ebola response can be applied to Zika:- the success of any intervention will depend on community acceptance. Integrated vector management aimed at reducing mosquito vector density in a sustainable manner is of primary importance. Intersectoral collaboration and efficient public communication strategies to ensure community participation are required for a sustainable vector control program.