Ebola virus – Vaccine Development and Prospects for a Recurrent Outbreak

Ebola virus – Vaccine Development and Prospects for a Recurrent Outbreak 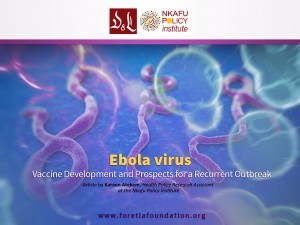 The West African Ebola outbreak on March 23, 2014 is one of the morerecent epidemics raising public health concerns and instilling global fear. Since the occurrence of this outbreak,the public health sector in many countries, including those that have never reported a single case, have been compelled to reinforce and strengthen their infection surveillance systems. With a case fatality rate of 90% (Northern Zaire subtype) and 50% (South Sudan subtype), (1) there is the urgent need to immunize susceptible populations to minimize the risk of disease resurgence. Although Ebola-affected nations have recently been declared “Ebola-free” by the World Health Organization (WHO), there is a great deal of trepidation that the disease might resurface due to the use of the Ebola vaccine. However, vaccine choices have proven to be promising both in achieving immunity as well as preventing any form of resurgence as demonstrated by a 100% efficacy of a virus-based vaccine in Guinea (2).The vaccine, however, is yet to be licensed.

The outbreak of Ebola Virus Disease (EVD), previously known as Ebola Hemorrhagic Fever (EHF) was first discovered in 1976 near Ebola River in northern Zaire,(1) nowDemocratic Republic of Congo (DRC) by Dr. Peter Piot. Subsequent outbreaks have occurred sporadically in various parts of Africa: Sudan in 1976 and 1979; Congo in 1977-2012; Uganda in 2000; Gabon in 2001; Sudan in 2004; to name a few. The most recent and deadliest outbreak in 2014 represents the first outbreak of EVD in West Africa, affectingsix African countries, with a case fatality rate ranging from 42% in Sierra Leone to 66% in Guinea (3), representing 28,637 cases and 11,315 deaths by December 2015 (4).This outbreak was remarkable not only for the fact that it was the first EVD outbreak in West Africa with the highest mortality, but also due to its cross-border spread involving European (Spain, United Kingdom and Italy) and American countries (United States of America).

The critical outcomes from this deadly epidemic has been the combined efforts and resource mobilization by the affected countries, international research institutes, and many health organizations to identify possible Ebola vaccine candidates in an effort to prevent the spread of the virus and subsequent attacks. Currently, no specific treatment or licensed vaccine for human use is available (5) but a number of vaccine choices have been developed and are under various clinical trials. Earlier unsuccessful attempts to develop Ebola virus vaccines used inactivated prototypes and/or live-attenuated vaccines, which had been considered too dangerous for human testing. Presently,most-used viruses are either recombinant, replication-deficient adenoviruses (Ads) or attenuated vesicular stomatitis viruses (VSVs), all of which are believed to cause no serious side effects in humans (6). With these characteristics, it will be highly unlikely for vaccine recipients to develop Ebola Virus Disease or a recurrent outbreak as the vaccine is a viral gene-encoded protein. This viral gene-encoded protein is recognized by the immune system and therefore able to elicit an immune response. In the case of subsequent exposure to Ebola virus, the immune system will be appropriately primed to ward off the infection. As reported by Frieden and Damon, potential risks for the re-emergence of Ebola disease is associated with the fact that Ebola virus reservoirs are not yet confirmed and that the possibility exists for sexual transmission from survivors (7).

Misconception and origin of fear

The present vaccine of choice for Ebola virus, the recombinant replication-competent vesicular stomatitis virus-based (VSV) vaccine, has been demonstrated to be non-pathogenic in humans, although it is replication-competent. It has further demonstrated 100% efficacy in preventing the contraction of the virus through ring vaccination in Guinea (3). Additionally, the efficacy of the Sierra Leone Trial to Introduce a Vaccine against Ebola (STRIVE), a combined Phase 2 and 3 clinical trial is not yet known. The trial was designed to assess the safety and efficacy of the vaccine and how well it helps to protect people from contracting Ebola in affected areas (8). Moreover, Liberia is presently implementing a Phase 2-3 clinical trial (the Partnership for Research on Ebola Vaccines in Liberia – PREVAIL) with outstanding results. With such positive outcomes, an Ebola vaccine has beentermed a «potential game changer.». With these demonstrated beneficial results, why does the public fear Ebola vaccination?

It is no surprise that many individuals are scared of developing the disease post-vaccination; there is previously documented evidence of negative outcomes of vaccines and certain vaccines trials. In the past, vaccine trials such as the case of smallpox vaccine discovery were highly unethical. Pus (later on called Vaccinia virus) from previously cowpox-infected individuals was injected into non-infected people and later challenged with smallpox virus. Inoculation with Vaccinia virus was highly effective for the prevention of smallpox infection, but was associated with several known side effects such as post vaccinal encephalopathy and encephalomyelitis (9). Also, adverse effects upon vaccination with Yellow Fever (YF) vaccine were reported by Breugelmans et al. (2013); out of 38 million people vaccinated in YF preventive vaccination campaigns within eight African countries, Cameroon inclusive, 3116 adverse effects were reported, 164 (5%) of which were classified as serious (10). It is also sometime worrisome that very little communication and investigation is done concerning various adverse events following immunization (AEFI), especially in low-income countries, partly due to significant lack of resources. Despite improvements in vaccine trials, previous trial scarried out to develop a vaccine for Ebola virus used the human Adenovirus component (Ad5 serotype), which became problematic; many individuals developed an infection at some point in their life after exposure to Ebola virus component of the vaccine (7). All of the above reasons and many more have contributed to the fear associated with the Ebola virus vaccine and has significantly reduced volunteering for various clinical trials.

Vaccine awareness is crucial in any vaccine trial. With greater awareness, it is possible to develop a vaccine for global use with sufficient trial participants as well as ensure the proper dissemination of information and sensitization of the affected population. There should be a more open conversation by public health practitioners about the potential short- and long-term risks and benefits involved in vaccination of individuals. There should be further emphasis on the type of vaccine (attenuated or live viruses) used during trials in order to enhance consent decisions by participants. It is imperative that information of such magnitude be well disseminated from central level through regional level and finally to district level in an effort to avoid any form of misconception and to encourage participation. The possibility of Vaccine Information Centers created in health facilities might be considered; a place where individuals could acquire ongoing trial information first-hand. Furthermore, vaccine awareness could be bettered through improved sensitization. This empowers people to make wise vaccination choices for themselves and their families regarding new vaccines.

Generally, adverse effects occur following immunization; the most common of which occur during trials. These side effects are usually rare and cannot be completely avoided due to individual response to inoculation. Hence, in order to reduce non-participation in vaccine trials due to side effects, the National Committee of AEFI should be strengthened both in human and financial resources in an effort to educate the public on these rare side effects. Further management of adverse effects that arise from vaccination require the implementation of a Vaccine Adverse Event Reporting System (VAERS); a vaccine safety surveillance program through which information about adverse events (possible side effects or health problems) can be immediately reported by anyone – doctors, nurses, vaccine manufacturers, and any member of the general public.

The notion of Ebola vaccine is new to the Cameroon health system and thus requires a higher level of political commitment to be introduced into the country. The Ministry of Public Health must be commended for its boldness in allowing the investigation of the vaccine in the country. Similar to other vaccines, political commitment alongside operational expertise have led to some of the greatest victories recorded in public health, including the eradication of naturally occurring smallpox and the near-eradication of poliomyelitis (11). High level of commitment may include introducing the vaccine into the Expanded Program for Immunization (EPI) as well as Supplementary Immunization Activities (SIA). Mass vaccination campaigns should be scheduled at regular intervals once vaccine has been licensed.

The impact and importance of vaccines is enormous. In as much as side effects occur, the benefits far outweigh any potentially negative consequences; providing a cost-effective and very efficient means of preventing illness, disability and death from infectious diseases. Despite significant progress towards the development of vaccines, there is need to accelerate the search for more vaccine candidates and vaccines due to the fact that many infectious diseases, including zoonotic types, are emerging and some re-emerging. A good example is the recent outbreak of Zika virus disease, an emerging mosquito-borne virus transmitted by aedes aegypti mosquito, which causes microencephaly in neonates.

Karen Atekem is a Health Policy Research Analyst at the Nkafu Policy Institute, a Cameroonian Think-Tank at the Denis & Lenora Foretia Foundation. She can be reached at [email protected]