Give Peace A Chance in Cameroon

Give Peace A Chance in Cameroon 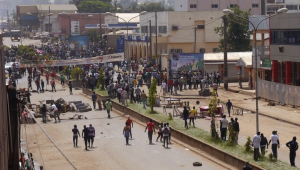 I have followed with interest the most recent call, dated October 18, 2017, by Dr Simon Munzu; the former United Nations Secretary-General’s Deputy Special Representative for Côte d’Ivoire.  The call included some pertinent question to Mr. Phelomon Yang, Prime Minister and Head of Government of the Republic of Cameroon.  Prime Minister Yang, on instruction from Head of State President Paul Biya, had travelled with most CPDM elites and sympathizers, to the Northwest and Southwest regions to ‘dialogue’ with Anglophones on the present crisis.

For clarity and to be brief, I hope we have all read the recent paper by the Crisis Group entitled Cameroon: Worsening Anglophone Crisis, Call for Strong Measure, dated October 19th, 2017. I equally assume we have all read the 2 letters of the Bishops of the Southwest and Northwest regions, listened to the recent message of the Moderator of the Presbyterian Church of Cameroon, read the letter of the leaders of the Baptist Church of Cameroon at the start of this crisis, read the letter of Mr. Abouèm à Tchoyi, former SG Presidency of the Republic and former Governor of the Southwest and Northwest regions of Cameroon and read the letter of the French Ambassador H.E. Yves Plumey to the Foreign Minister of France in Paris on the 15th of October 1985.

From the above literature, I have the following questions to ask my CPDM sisters and brothers:

To my Consortium/SCNC/AMBAZONIAN brothers, I confess that, without your mobilization, Barrister Nkongho Agbor Balla, Dr. Fontem and others would still be rotting in jail today. Your resolve, steadfastness and sacrifice have taken this struggle to where it is today. The success of ghost towns, schools shut down last academic year despite all attempts by the government, civil society and even some opposition leaders on the home front to change the narrative is ample testimony that you read better the frustration and anger of our people. At this point in time, there is no Northwest/Southwest divide in this struggle. You succeeded where many had failed before you.

I salute your adherence to NON-VIOLENCE. On the 22nd of September and the 1st of October 2017, we all saw a courageous population, armed only with branches and leaves, came out to demonstrate peacefully; not one knife was reported in the Southwest and Northwest regions.   On the foreign front, we saw how the CPDM teams, sent to meet the diaspora, were humiliated.   And, of course, the demonstrations in New York at the UN and President Biya’s hotel, as well as President Trump’s “non-invitation” for Biya to a dinner offered to African Heads of State in the same hotel.  The importance of the last, if not all of these actions cannot be minimized.

Today the Anglophone problem is no longer an insignificant trouble instigated by a small group of internet ‘generals’ hiding in the diaspora, or a few disgruntled lawyers and teachers. I was in New York on the 22nd of September 2017 and I can certify that, based on what I saw, the diaspora is highly motivated and organized towards looking for a solution to the Anglophone problem. There is no doubt about that.

However, after all of this, my question to my CPDM/SCNC/AMBAZONIAN/Consortium brethren is— What Next? Can the CPDM elite return to Yaoundé and pretend that it can be “business as usual”? It would be foolhardy!!! My SCNC/AMBAZONIAN/ Consortium brothers—Are we prepared to turn the SW and NW regions into a war zone? I hope NOT!!! If what I read in the paper, written by the International Crisis Group recently, is correct and I have no reason to doubt the veracity of such a reputable institution, then we all have a responsibility to stand up and speak out against violence…NOW.

The Biya regime has consciously and irresponsibly led us to where we are today. The cosmetic and mundane reforms in ENAM, the Supreme Court or by appointment of two army generals (C/o letter of Mr. Le Anderson of the civil cabinet of the Presidency) is too little, too late. Nobody can genuinely ask Anglophones to be content with that, after so many have been slain; which is correctly described as genocide by the Roman Catholic Bishops of the Southwest and Northwest regions, the Presbyterian Church of Cameroon, Chairman Fru Ndi of SDF and many credible NGOs.

Am I disgusted? YES, I AM DISGUSTED WITH THE REGIME.

But are we to be led by our justified emotions? I think, NO.

That is why I am taking the risk of writing this paper, very sure to be insulted by both the CPDM elites and the SCNC/AMBAZONIAN faction to dare say, ‘let us give Dr. Simon Munzu a chance’.

I have this to say to Prime Minister Phelomon Yang, a man I deeply respect.  I recently lived in Bamenda for 8 years, and know what is said there about you. For close to 40 years as Minister, Ambassador or Prime Minister of the Republic of Cameroon, I am unaware of any financial issue linked to you.   However, Sir, it’s important to remember that Southern Cameroons voluntarily voted to join La Republic du Cameroun in February 1961 and the referendum that abolished that federation in 1972 is flawed. When President Ahmadou Ahidjo was to resign as President in 1982, he skilfully modified the constitution to displace the Honorable Solomon Tandeng Muna in favour of then Prime Minister Paul Biya. THAT IS ALSO ONE OF THE FACETS OF THE ANGLOPHONE PROBLEM SIR. Unless Sir, you want to and can fight like H.E. Mr. Allasane Quattara of the Cote d’Ivoire for which I have my doubts unless there is French support.   Stand up sir, like Dr.  EML Endeley in 1954 in Nigeria. WE, your people sir, are at a crossroads and need your leadership. We need strong institutions and not strong men in the 21th century in Cameroon.

To conclude, I am appealing to all, to GIVE PEACE A CHANCE. Dr. Simon Munzu is somebody I know well; he was my lecturer in the then University of Yaoundé during my last year there in 1980. From his call, he is solution orientated and not seeking power for himself. To avoid further bloodshed he thinks, I imagine, that Federation is the way forward. Decentralization, as we know it, has failed. No doubt about that. Dr. Simon Munzu is an intellectual with a world of experience both at the United Nations and at home. As a University lecturer, he had campaigned for both the CPDM and the Opposition and today, he is of the civil society. He definitely has a very good view of the problems and the solutions that are feasible. “Kicking the can” down the road is not a viable option. The next time around, this uprising will certainly not be easy to handle and I fear for the worst. Most of the leaders who are above 70 or 80 years old today in the CPDM regime will be dead. Surely as there is day and night there will be a tomorrow if nothing changes. Think about that.

Mbonde Barnabas Ebule is the former CPDM Section President for Fako 2 (Muyuka-Fako). Prior to his escape from Cameroon in January 2017 he was the Deputy Director for Legal Affairs at the National Social Insurance Fund (CNPS), haven served the institution for 35 years. By endorsing the Anglophone problem early on he resigned from his position rather than remaining indifferent to the plight of Anglophones. He was marked for arrest but succeeded in leaving the country.