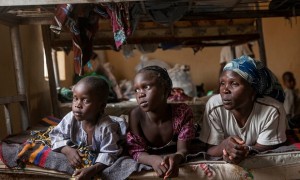 [dropcap type=”circle” color=”#FFFFFF” background=”#8C212A”]F[/dropcap]or the past five years, Nigeria has struggled with the Boko Haram group, which has so far been responsible for many deadly attacks. Since early 2014, such attacks have been particularly vicious, targeting public and strategic places such as markets, hospitals, army barracks, and schools in countries located along the Lake Chad Basin.  This has resulted in the massive displacement of thousands of civilians throughout Nigeria and into neighboring countries.  The Boko Haram insurgency goes hand in hand with issues such as access to food, water, shelter, and other basic rights. By May 10, 2015, the UN Refugee Agency had registered 42,242 Nigerians who had taken refuge in Cameroon due to Boko Haram attacks (UNHCR).

Given this backdrop, important questions must be raised and hopefully addressed, such as what is the impact of this insurgency on public health and socio-economic conditions in Cameroon? What policy recommendations are appropriate as the Cameroon government seeks to respond?

Since May 2013, Boko Haram attacks have intensified along Cameroon’s northwest border, resulting in the looting of villages and killing of innocent civilians, as well as mass kidnappings. In Cameroon, such attacks have been characterized with killings, bombings, thefts, and property destruction (including that of schools, homes, and businesses) in the Far North region. The terrorizing effect on public health and socio-economic conditions has become so devastating that institutions and businesses have largely closed down in many villages.

The increased presence of Boko Haram in the Far North poses an immediate threat to the health of affected communities because public health programs for diseases control and prevention cannot be carried out under such circumstances. For example, immunization campaigns in the region have been plagued by insecurity since the beginning of 2014, when Boko Haram began to extend its attacks from Nigeria into Cameroon. At least nine of the thirty health districts in the Far North Region have been directly affected, with women and children being the most impacted. Likewise, access to health care systems by the local population is difficult, as some clinics have been closed as a result of insecurity.

The influx of Nigerian refugees into northern Cameroon has also put a strain on local health care services, which unfortunately are too poorly equipped and severely understaffed to handle the already large caseloads. According to the UN Office for the Coordination of Humanitarian Affairs (OCHA), by April 2015, an estimated 106,000 Cameroonians living in border communities had also been displaced within the country’s Far North Region. Many local health workers have fled the area, further straining already limited resources. This constant movement of people makes administering childhood vaccinations particularly difficult. The oral Polio vaccine requires four doses, usually given four weeks apart in order to be fully effective. As people flee one attack to the next, it is very challenging for health workers to keep track of their whereabouts and follow up on administering booster doses.

Moreover, the absence of surveillance of the country’s displacement dynamics by the national surveillance system and the gaps in data collection mechanisms for demographic data result in an alarming lack of understanding of how people’s vulnerabilities and risk factors are complicated by multiple cycles of displacement. This invariably leads to response efforts that are fragmented at best, and generally inadequate. In the Minawao refugee Camp in the Far North region, the population has reached a level where more urgent action need to be undertaken to build more tents and provide sanitary facilities such as toilets and new wells. According to UNHCR, one toilet in the camp is shared by 136 persons on average while the international standard for emergency settings such as refugee camps is one latrine for every 50 people. Still, in the Minawao camp, other urgent needs are still not being adequately covered. Major concerns include the access to clean water and sanitation, with only 60% of the water needs covered.

On the other hand, most internally displaced people (IDPs) live with host families, and their needs are neither assessed, nor addressed by government, local, or international actors. Those who live in camps receive relief, but still often lack access to sufficient food, essential household items, and healthcare. Protection risks are widespread in areas that suffer conflict and violence, and many people are afraid to return home. If their property has been damaged or destroyed by conflict or natural disasters, many IDPs do not have a home to go back to. The IDP status will often come with a lot of consequences, as it exposes one to victimizations of all sorts. At the same time, individuals with HIV, tuberculosis, and other chronic diseases, such as hypertension and diabetes, have been off medication for a longer period of time either because of constant displacement, closure of some treatment centers and pharmacies, or because of extreme poverty.

Prior to the Boko Haram insurgency, the Far North region of Cameroon was already suffering from chronic malnutrition, with food insecurity in more than 17.9% of households (Demographic health survey, 2011). With increasing insecurity, displacements, reduced income potential, poor access to health, food, water, and sanitation, it is more likely that the situation would continue to deteriorate. According to UNHCR, 545,500 people are at risk of food insecurity in the area, with 194,500 children at risk of malnutrition, including 64,570 exposed to severe acute malnutrition.

An assessment in the four divisions most affected by this insurgency in the Far North region (Diamare, Logone et Chari, Mayo-Sanaga, and Maya-Sava) carried out by UNICEF and the Ministry of Basic education revealed that up to 120 schools were forced to close down in ten districts for the 2014-2015 school year, with many of the buildings now occupied either by displaced population, or by armed groups. It is estimated that over 29,000 students remain at risk of losing the entire academic school year as a result of school closures. Even in schools that were not forced to close down, the conflict has had an impact on teacher attendance, with 383 primary school teachers reportedly absent in the region.  For the Cameroon Ministry of Economy, Planning, and Regional Development (MINEPAT), Boko Haram has led to a drastic fall in the number of tourists visiting areas such as the Waza Reserve and Rhumsiki peaks. Other industry sectors most affected by the insurgency include hospitality, transport, trade, agriculture, and livestock.

The prevailing insecurity has forced major engineering and public infrastructure projects to be discontinued. Likewise, several community markets are threatened with foreclosure. Such constraints have a direct impact on the public health sector with regards to jobs lost, the supply of essentials drugs and medicine, and the level of community health.

Boko Haram’s impacts on agricultural communities cannot go unnoticed. Attacks in many villages force farmers to flee their farmlands. As a result, farms and crops are abandoned. An assessment by the Cameroon Ministry of Agriculture and Rural Development (MINADER) in the Far North’s three most affected divisions of Mayo-Sava, Mayo-Tsanaga, and Logone-and-Chari, found that an estimated seventy percent of farmers have deserted their farms. When farmers don’t make any harvests from their main source of income, inflation of food prices follows, and, unfortunately, displaced individuals do not have the purchasing power to afford basic goods. The prices of basic commodities, such as corn, sorghum, and petrol, have risen by twenty to eighty percent since March 2014, according to MINADER. Some people may even be tempted to resort to criminality and organized crime as a means of accessing food. This results in a vicious cycle where violence breeds additional insecurity and predictable socio-economic decay.

Based on the assessment of the implications of the Boko Haram insurgency in Cameroon, a few policy recommendations can be quickly advocated. First, we need better data to assess the health burden of war in order to make the allocation of humanitarian aid much more efficient. Although one obvious consequence of insecurity is the health burden to affected communities, this, however, receives relatively little attention in the public health debates. This may be because according to the World Health Organization (WHO), 0.3% of all global deaths are due to direct violence in conflict, and we do not currently know how much the mortality rate is raised due to increased incidence of infectious diseases, and increased prevalence of communicable diseases in the long term. This may explain why war has received relatively little attention by public health experts. Compared to diseases such as HIV/AIDS, malaria, and childhood illnesses, wars result in the death of a relatively fewer number of people, and the indirect effects of war on communicable diseases is very hard to estimate. The Boko Haram insurgency is an urgent wake-up call for policymakers in Cameroon and global health agencies to provide humanitarian aid. Health workers and health supplies, including vaccines, need to be deployed to both official and unofficial camps. Efforts should be focused on how to reintegrate returning refugees, and on building capacity for early preparedness for future humanitarian emergencies. In the Long term, training trauma advisers and building supportive institutions and structures for war time economy can be encouraged as a way to study and understand the impact of the realities encountered by victimized communities.