Political Echoes from Uganda; Of President Museveni, Cincinnatus and insatiable appetite for power

Home/General, Policy/Political Echoes from Uganda; Of President Museveni, Cincinnatus and insatiable appetite for power
Previous Next

Political Echoes from Uganda; Of President Museveni, Cincinnatus and insatiable appetite for power

A legend is told of Lucius Quinctius Cincinnatus (c. 519–430 BC), an aged Roman farmer who stood up to be counted during his country’s dire time of need. On prompting by his embattled compatriots, Cincinnatus abandoned his plow to assume despotic authority over the state. After sixteen days of absolute power, he had vanquished the enemy and saved Rome. He then laid down his sword, relinquished his power and returned to his plow. Cincinnatus is often quoted as the epitome of civic virtue, modesty and service for the greater good; a transformer who thought not of himself, but a higher cause. The United States has its own version of Cincinnatus in its first president, George Washington (c. 1732-1799). At the end of the American revolution in 1783, Washington, rather than seize power, voluntarily resigned as commander-in-chief. He then presided over the constitutional convention, which devised the current form of federal Government, was elected president and later retired after serving two terms. As a military leader, Washington fought under the assumptions of only two formal pledges: to resign as soon as independence was won and to receive no compensation for his efforts. History is laden with similar stories of men of valor, who put country before self.

In 1986, Uganda’s Yoweri Museveni ascended to the presidency after 5 years of a bloody but popular civil war against the brutal regime of Apollo Milton Obote. Between Obote, Idi Amin and other transient in-betweeners, Uganda had borne its fair share of post-independence turmoil and terror. President Museveni started the guerrilla insurgence after unsuccessfully competing in the 1980 presidential election, which many analysts agree was rigged. His clarion call to arms was premised on the need to not only gain power, but also cause a fundamental change in Uganda’s political plight. In his words: “Once again, a minority, unpopular clique was imposed on the people of Uganda, leaving them with no option but to take up arms in defense of their democratic rights.” Without surprise, many Ugandans embraced the National Resistance Movement (NRM), a broad-based Government instigated by the new leader. Although political parties were banned, many politicians from erstwhile hostile regimes were co-opted. The guerrilla outfit, the National Resistance Army (NRA) morphed into a national army. Things were looking good for the young nation. Lo and behold Uganda’s Cincinnatus! Or maybe!

One of Museveni’s first promises was to return “power to the people” after a brief transition period. Following a 4-year constitutional review commission and intense debate by elected representatives in the Constituent Assembly, Uganda promulgated a new Constitution in 1995. Two central tenets in the Constitution were Articles 105(2) and 102(b), putting lids on eligibility for the presidency based on term and age limits respectively. Because of a checkered past dominated by violent overthrows of Government, the provisions for a maximum of two 5-year terms and an age cap of 75 were less than contentious. Under the new law, Museveni competed for presidency in 1996 and 2001. In 2006, he would have been ineligible. It was never to be. Conveniently, in 2005, Uganda’s NRM dominated Parliament passed an amendment that did away with presidential term limits, amidst allegations that each member was bribed with UGX 5 million (about $1,400). The NRM transitioned into a political party. Although political parties were then allowed to operate, their space remained narrow in an environment where NRM and the state are synonymous. Museveni went ahead to contest in the 2006, 2011 and 2016 elections. All the elections have been less than glamorous, characterized by voter bribery, polling irregularities, intimidation by the police/military, and imprisonment of political opponents. To date, Museveni has been in power for 31 years; longer than the period for which 77% of Uganda’s 40 million people have been alive. By the time his current term ends in 2021, he will have ruled for 35 years. If press reports are correct, machinations to remove the remaining safety net against his possible life presidency: dispensing with the age limit of 75 years (he will be 77 in 2021) are in high gear.

I have always admired President Museveni. My Dad has served as a local leader in his Government since 1986. God save me if he reads this note. Growing up, I heard gory stories of how he often spent nights in manholes under pursuit by Obote’s henchmen during the Museveni-led guerrilla war. He owes his life to Museveni, so he says. Before you ask, yes, he was a rebel sympathizer, and he did occasionally provide logistical support. He was one of the lucky ones. More than 200,000 people lost their lives during the war, including combatants and innocent civilians. Such sacrifice should never be in vain. The NRM’s ten-point program blamed Uganda’s problems on political manipulation and sectarianism. The NRM promised democracy, security, a self-sustaining economy, efficient social services and eliminating corruption, among others. They started on good footing. Buoyed by a structural adjustment program prompted by the World Bank and debt relief, Uganda initially saw sustained economic recovery. This lasted until the mid-2000s. To Museveni’s credit, peace has been restored in most parts of the country, especially after defeat of the Joseph Kony-led rebellion.

On the negative side, Uganda is one of the most corrupt countries in the world. We rank 151st (out of 176) in the 2016 Transparency International Corruption Perception Index (from 130th in 2012.) More than 80% of the youths are unemployed. Social service delivery is in dire straits. Politics has become the leading “cash crop”. Economic inequality has hit heinous proportions. Society is segregated: to some, the law is a command, while to a select few, it is a suggestion. Clearly, we need a radical rethink of how to move forward. President Museveni has not failed. He has served his part and needs to peacefully pass the baton on. There are precedents. With a cursory glance, I fail to recognize any African country that owes its progress to leaders who overstay in power. Museveni’s mentor, Julius Nyerere of Tanzania knew when to call it quits. Kenya and Tanzania, our neighbors, have had peaceful transitions as Uganda stares on. To further tighten his grip on power, Museveni has sometimes turned to autocratic tendencies and breach of human rights. The NRM Government has mastered the art of a constitutional dictatorship: it is well known for its ability to coexist with institutions that give semblance of democracy, and yet strike with an iron hand when it sees fit especially in suppressing dissent. However, it seems we are reaching a yield point where political risk from such a dispensation grossly outweighs any potential gain for majority of the citizens.

Of course, the constitution can be tampered with to remove the age limit. The NRM can do anything for self-preservation, and it has the numbers and financial (read public resources) clout to achieve thus. Adequate financial compensation to garner the requisite votes is being mulled. The Executive is the aboriginal wielder of power. The legislature looks hapless and is surely not up to the task. However, to my friend, President Museveni, the father of the nation, I have one passionate plea. I adore you. I revere you. I know there is a lure in power. I know you will be prompted by many to hang on. Most of these are self-seekers and do not have Uganda at heart. You have laid a good foundation for the nation to move on and forever hold you in high esteem. Please do the right thing and rule yourself out of any schemes to stay in power. There are no exigencies to justify your stay. Do not destroy your legacy. Work on a succession plan in your own party. Any change for Uganda is grand, even if it is to someone in the NRM. I know my missive will be prone to trenchant criticism. Yet, I must add a voice to countless others. Sadly, I am also one of the bitter-enders who know you will get your way nonetheless. 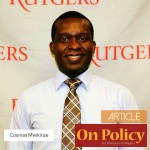