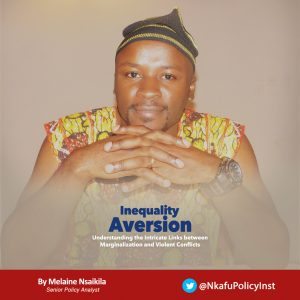 Adam Smith, the Scottish economist, philosopher and author, in his book titled An Inquiry into the Nature and Causes of the Wealth of Nations(1776) highlighted the fundamental and crucial role human self-interest plays in the economy.

“It is not from the benevolence (kindness) of the butcher, the brewer or the baker that we expect our dinner, but from their regard to their own interest.” This implies the butcher only cuts meat to sell; in an effort to care for himself and his family. The same is true for the butcher and the baker. It is therefore – Smith suggested – that rational self-interest and competition can lead to economic prosperity.

With this as a premise, it suffices to deduce that, according to Adam Smith, self-interest is arguably the single largest motivator of economic activity. However, judging from a plethora of instances, especially in countries south of the Sahara, there emerges circumstances during which individuals shun self-interest regardless of their respective status, for the collective interest of their society. Faced with situations of real or perceived systematic marginalization, rising poverty, political corruption, managerial ineptitude, downward social mobility, lackluster economic performance and rising inequality, collective interest informs most, if not all decisions and actions[(Ylönen 2005), (Ylönen 2009), (Langer 2004)].

The point, whereby, as opposed to self-interest, the collective interest of society predominates human thinking with the intention to avert a cycle of inequality and restore economic sanity is referred to, in economic thought as Inequality Aversion (IA). IA is therefore the preference for fairness and resistance to incidental inequalities that result from unjust outcomes.

Inequality is the difference in size and or degree of a particular phenomenon. There is natural inequality that stems from differences in health, age or other physical characteristics such as the distribution of natural resources. There is also inequality established by the convention or the consent of man. Recently, this form of inequality has been rising and preoccupied some governmentsand institutions. While a part of it emanates from advantages unduly accrued to some selected individuals in society, the phenomenon may also arise from an edge in entrepreneurship and innovation that some may possess over others. For example, many of the rising number of millionaires and billionaires in the Western world amass wealth not from the exploitation, cheating or marginalization of people but from their entrepreneurial and innovative acumen. The income inequality, which arises from this situation in theory, as suggested by The Economist,may have a relationship with prosperity because the rich save and invest more, and people tend to work harder in response to incentives, which definitely fosters upward social mobility. However, this type of inequality may boost prosperity only within countries. The inter-country inequality may widen.

In as much as inequality brought about by innovation and fair competition may be a worry, never has it been the basis of protracted conflicts, claiming thousands in human life and hundreds of millions Francs’ worth of property. Contrarily, the numerous insurrections and prolonged conflicts across most of Africa are a result of inequalities perpetuated along cultural, regional or ethnic lines. Horizontal inequality, which represents inequalities between culturally defined identity groups, (as conceptualized by Arnim Langer and Frances Stewart) is a major source of persistent underdevelopment. It has been the source of many civil wars and other smaller conflicts. Horizontal inequality therefore, whether perceived or actual, is a security menace that must be prioritized by those engaged in promoting economic development.

It is necessary to note that even within marginalized communities; there are well-to-do people who rarely participate in the dissent against the injustices of the times. Dissent however, becomes more dangerous with the potential of violence when such individuals are ready to sacrifice their gains and privileges to fight for the greater good of their communities. At this point, collective interest supersedes self-interest [inequality Aversion], and in extreme cases, it is an “ALL or NOTHING” demand with possible catastrophic social, political and economic consequences.

The Case of Cameroon: Averting a Protracted War

Dating back to the late 1970s and early 1980s, a few years after the federal constitution was abrogated and the unitary state came into play, there emerged severe injustices (some perceived, others actual) within the Anglophone community. Referred to as the Anglophone Problem, the Anglophone people of Cameroon, through their representatives, raised a number of issues including, but not limited to:

These problems, specifically raised by the Anglophone community, were largely ignored by the state until the onset of the current political turmoil, which commenced October 2016. From a strikeinitiated by the Anglophone teachers and common law layers, the crisis has transformed into a more dangerous political and security situation costing many human lives. With the main leaders (teachers and lawyers) of the movement losing command, there is a risk of the situation further spiraling out of control, hence worsening the already dire economic and humanitarian situation.

It is worth noting that this all started with basic complaints and demands. Crisis mismanagement limited an objective government intervention with mutually deliberated solutions. As such, demands increased, tensions flared, and violence ensued. What began as complaints and demands has become a movement that threatens the very foundation of the country.

The grievances listed above represent horizontal inequalities and, with the growing knowledge of these realities, there is an increasing number of Anglophone Cameroonians forfeiting their hitherto quiet and apolitical lives; they are calling for an end to Anglophone marginalization. The situation is worsening with the potential of further escalation.

Erroneously referred to by the government as a “fringe group” sowing discord in the country; each day is marred by deaths and destruction.  The rise in refugee numbers has mainstreamed secession among many Anglophone Cameroonians. Without concrete inclusive action initiated by the government, the phenomenon continues, and despondent youths join ranks with the armed resistance; thereby making the situation even more precarious with demands of Statehood restoration or nothing amongst other dictates. It is therefore imperative to sensibly and, in a timely fashion, step in with the right intervention and concessions. Military intervention should be avoided at all costs in an effort to curtail the growth of the secessionist movement, and avert national catastrophe.

These researchers, political pundits, and policy experts, however, have established more than the causal relationship between conflicts and inequality; they have made several policy recommendations required to solve a crisis similar to that occurring in Cameroon.

With specific country features, the following could restore genuine calm, as well as foster long lasting peace in Cameroon; thereby creating an atmosphere in which economic initiatives yield gains.

With conclusive evidence from both local and international institutions, researchers have established that, within the framework of a federal republic, the current issues will be easily managed. However, changing from one state form to another implies there would be winners and losers. This constitutes an impediment. The losses have to be mitigated to somehow “encourage” those resisting change to come on-board peacefully. If the change is not peaceful, it may have to be imposed through a costly war.

In addition, a majority of big business in Cameroon is likely fiercely opposed to changing from a unitary to a federal structure. Their networks might be threatened; the ability to predict the future within the current system would most probably be shattered. This induces undesirable uncertainties, fueling the resistance to change. Such individual and institutional concerns need to be factored in if state form discussions are to begin.

Economic Opportunities and Regional Development: As the debate to determine the specific federal state form is triggered, subsequent investment budgets allocated to specific regions should be a reflection of 1) the need and 2) the relative contribution to the national output.

For example, in 2017, according the Project Log Book published by the Ministry of Economy, Planning and Regional Development (MINEPAT), the South Region (whose population is only about that of Mezam Division in the North West Region) was allocated 570 projects to the sum of approximately FCFA 126.2 billion. The North West and South West Regions had 500 projects to be executed at FCFA 42.5 billion and FCFA 43.2 billion, respectively. This implies that the budget for the South Region alone surpasses that of the North West and South West combined by approximately FCFA 40.5 billion.

Such figures further highlight the marginalization decried by Anglophones provide an incentive for radicalization. An equitable – across the board- public investment budget allocation is required in future. Not only will jobs flood into the English regions, standards of living will increase; dampening the incentive to engage in violence.

Genuine Inclusive Dialogue: From the onset of the current crisis, state officials (including the president), private citizens, international organizations and other countries have called for dialogue. However, these numerous calls for dialogue stop short of clearly stating what genuine dialogue includes and who the appropriate stakeholders are.

Given that most of the current hostilities are perpetrated at the grassroots level, the leaders of those groups should be represented. In essence, genuine dialogue requires discussion of the following topics:

Though not comprehensive, addressing the problem in this way will go far in achieving a lasting peace and coexistence.

Melaine Nsaikila is a Senior Policy Analyst at the Nkafu Policy Institute, an independent Cameroonian think tank at the Denis & Lenora Foretia Foundation in Yaounde.