The development of Africa, a legitimate and projected aspiration 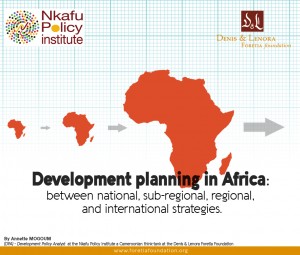 It seems a cliché to say that Africa needs to achieve its development. In spite of abundant natural and human resources, African states have many challenges to face on political, economic, socio-cultural and scientific plans in order to take the step toward emergence. The latter is a profound aspiration, recurrent in speeches as well as in international forums which try to prepare Africa for a glorious future. During one of the more recent of these forums, the Rebranding Africa Forum, a guide of 50 key ideas for the emergence of Africa was been presented.

Africa is not lacking in initiatives; on the contrary, several initiatives have been introduced throughout the continent since independence to plan its development. Indeed, development and planning go hand in hand. Planning is a necessary and indispensable exercise for any organization that wants to prosper. It is a short- or long-term projection of carefully specified objectives that an organization is meant to perform through ongoing efforts. Some strategic projections of development in Africa emanate from states, sub-regional and regional institutions; others are formulated in multilateral and international frameworks. Are the two complementary?

Endogenous visions of development in Africa
States are primarily concerned in the development’s dynamics. The term “developmental state” means a state has named economic development as the top priority of governmental policy, and is able to design effective instruments to promote that objective. It is within this framework that complete planning documents like Strategy Papers of Poverty Reduction and other more ambitious documents with growth and social development strategies are outlined. Their role is to determine best practices for achieving economic transformation of the country, to ensure that activities constantly move in the planned direction and to make any adjustments in case of failure.

Also, at a national level, some African states are engaged in development dynamics designed to create conditions for sustainable growth. Many of them have projected the period of their emergence between 2020 and 2035. Cameroon, for example, opted for a long-term vision of development with an expectation of an emergent, democratic and united country by 2035. The Gabonese selected a date of 2025 as part of its Emergent Gabon Plan. It is the same with the National Development Plan in the Ivory Coast, which aims to make itself an emergent country by 2020. Initiated by President Macky Sall, is the Emergent Senegal Plan, with a scheduled date no later than 2035.

Sub-regional integration is an equally important growth strategy for African states. As a process by which countries in the same geographical area constitute a single economic space, the strategy facilitates the free movement of goods and people, the realization of scale economies and the creation of infrastructures, transportation networks, and investment projects between African countries. All contribute to the optimal allocation of common resources. Thus, the ambition of the Regional Economic Communities (RECs) in Africa is to promote integrated and harmonized development.
In Central Africa, the Economic and Monetary Community of Central Africa (CEMAC) implemented the Regional Economic Program (PER) that plans a vision of the sub-region by 2025. It aims to “Make the CEMAC an integrated economic and emergent space where security, solidarity and good governance prevail for human development.” In West Africa, the Economic and Monetary Union of West Africa (UEMOA) has its own Regional Economic Program which aims to accelerate and strengthen the process of regional integration and to support economic growth through the implementation of structural and integration projects in all member countries of the Union.

At regional and continental level, from the Organization of African Unity (OAU) to the African Union (AU), there have been many initiatives oriented towards Africa’s development. The Lagos Plan of Action 1980-2000, adopted in 1980 in Nigeria, had the honor of being the first outline in the projection process of economic development in Africa. Unfortunately, it failed in getting the continent to commit to best practices for achieving this objective. On June 3, 1991, African countries signed the Abuja Treaty establishing the African Economic Community by 2025. The treaty came into effect on May 12, 1994 but has yet to become actualized. Aware of the enormous economic delay of the continent, African leaders had created, during 2001, development plans based on internal efforts and partnerships with donors. It is in this context that the Millennium African Plan (MAP), the Omega Plan and, later, the New Partnership for Africa’s Development (NEPAD) took place. From its launching at the AU summit in Lusaka in 2002, the NEPAD has been considered as the most important development initiative of the African continent for decades. Overall, it aims to develop an integrated socio-economic development framework for Africa by taking into account the major challenges that the continent faces.
All of these strategic plans are an eloquent illustration of the commitment of African leaders to lift the continent out of the vicious circle of underdevelopment. They also reflect the acceptance by Africans of their own responsibilities in promoting economic, political and socio-cultural, endogenous and self-sustaining development. However, the continent is not exempt from the global development programs of international organizations or guidelines of some donors as a precondition for development assistance.

Foreign programs for Africa’s development
The international society is evolving in the context of globalization characterized by joint participation in worldwide challenges. The UN, through its institutions, has contributed to a gradual awareness of development challenges faced by countries. In the same way that the Structural Adjustment Programs (SAPs) recommended certain behaviors and priorities to address the challenges of socio-economic transformation, other initiatives have been adopted at the international level. The Millennium Development Goals (MDGs) were adopted by state leaders at the UN Summit of the Millennium held September 6-8, 2000 in New York. The eight goals were expected to be achieved in 2015.

Despite deployed efforts, many shortcomings have been noted and today we are talking more about the post-2015 agenda. Indeed, to ease the burden and keep the MDG momentum moving forward, the UN worked with governments and partners and developed an ambitious program post-2015: Sustainable Development Goals (SDGs) by 2030 adopted last September. Africa remains one of the main targets of these plans as evidenced by the number of reports published on the issue of development of Africa by international institutions. They intend to help reduce disparities between Africa and the developed world.
In the end, there are several pathways useful to Africa’s planning framework for development. If each of these initiatives contains hopeful ideas for socio-economic transformation of African countries and the continent’s future, they may seem competitive and inoperative if a real coordination is not put in place.

The challenge of coordination
Considering the multitude of visions, strategies, and programs with disparate agendas for the development of the continent and its states, one could question whether there is not a problem of complement and synchronization between these national, sub-regional, continental and international plans. Indeed, the existence of all of these plans might constitute a real challenge for states responsible for implementation at the national level. While formulating their national strategies, they have the task of reconciling, self-sustaining development and priority issues on international plans. Therefore, national development strategies should go beyond the too narrow objective of poverty reduction and take into consideration the various development programs adopted at international, continental and sub-regional levels.

Furthermore, external development programs should not ignore endogenous initiatives on the continent. As an example, the functioning of NEPAD is supported by several international institutions such as the World Bank. More than simple obligations to individual countries, strategies beyond the national framework could be seen as useful guides for reaching global and sustainable development. In this context, the main mandate of the UN African Institute for Economic Development and Planning (IEDP) is to support African governments in their capacity building in the domain of planning. Concerning development partners, the Paris Declaration of March 2, 2005 on development assistance provides a means of coordination to the extent that development aid should be aligned with the planning of countries and follows strategies developed on the basis of national priorities.
However, even if the common and ultimate goal is economic growth and structural transformation of African countries, there remains some difficulties in defining agendas; it is difficult to understand how a state may be emergent in the sub-region and not yet at the national level or vice versa.

Keep the direction
For decades, there has been a succession of promising development plans at national, sub-regional, continental and international levels for Africa. They are undoubtedly guides showing the way for the emergence of the continent and its states. Unfortunately, some of these initiatives have fallen into disuse without really bringing the expected results owing to deficiencies arising from the conception and implementation of planning documents, institutional weaknesses and external shocks. Moreover, with the advent of globalization which may result in the continent being neglected, it will be critical not only to multiply the levels of development planning in Africa, but to focus on translating these aspirations into concrete results so that Africa can effectively reach out and seize the opportunity of emergence being offered.

Annette MOGOUM is a Development Policy Analyst at the Nkafu Policy Institute, a Cameroonian think-tank at the Denis & Lenora Foretia Foundation. She can be reached at [email protected]