Archbishop Emeritus of Douala, Christian Cardinal Tumi has been awarded this year’s edition of the Nelson Mandela Memorial prize for his role in promoting peace and human rights in Cameroon. 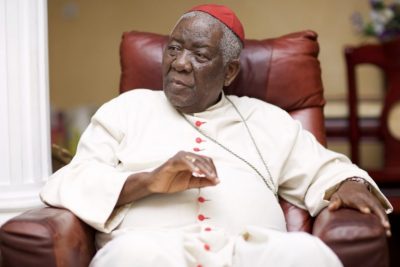 He saw off competition from Achaleke Christian and Edith Kah Walla to grab the award organised every year by the Denis and Lenora Foretia Foundation to celebrate the life of Nelson Mandela and his fight for justice in the society.

Receiving the award on behalf of Cardinal Tumi, Father Michael Tchoumbou thanked all those who voted for the prelate and said it is a call for all Cameroonians to join hands advocate for peace, justice and human rights in the country.

Christian Cardinal Tumi has for the past year brought together religious leaders from various denominations under the Anglophone General Conference to brainstorm on ways of putting down proposals for an inclusive dialogue to end the crisis in the North West and South West regions of Cameroon.