Some Cameroonians have doubted if the present form of state can effectively solve the Anglophone  crisis the country is facing since 2016. They were speaking at a webinar organized by the Nkafu Policy Institute, a think tank at the Denis and Lenora Foretia Foundation. Organized under the topic “Can the Anglophone crisis be solved in a state centric approach”, the town hall event took place on January 27th 2021 and was  opened to the general public both within and out of Cameroon and had as  objective   to serve as an opportunity to stakeholders in the conflict and the general public to engage on a debate on to the extent to which the state centric approach can be effective in resolving the crisis in the North West and South West regions of Cameroon. 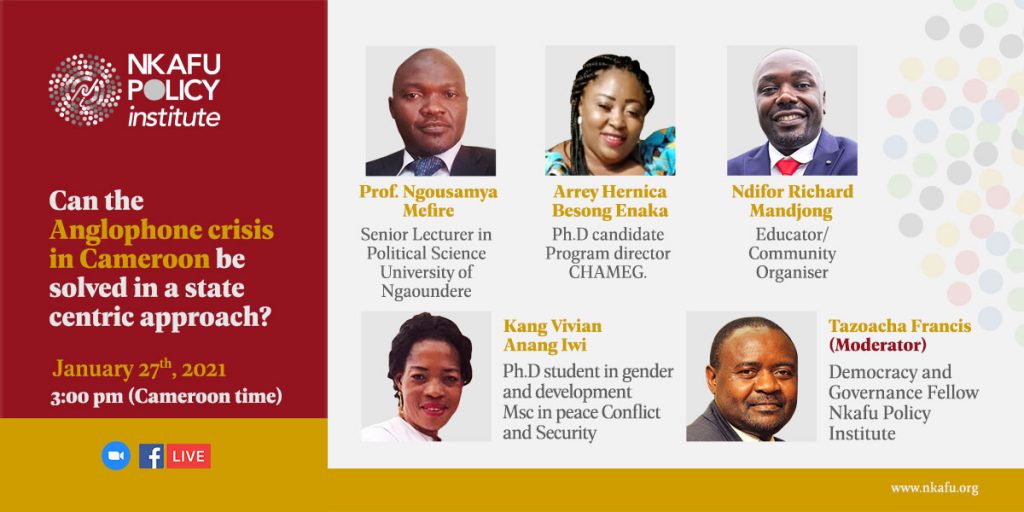 According to the Yaounde based think tank , the socio-political climate in and about the Anglophone regions of Cameroon has been a matter of contention for the past four years. The Nkafu policy Institute says ”the long standing grievances among the Anglophones population in the Southwest and Northwest regions of Cameroon concerning marginalization particularly in the educational and legal systems by the Francophone-dominated government led to widespread protests in October 2016”. The conflict, the institute says  ”escalated from a peaceful demonstration that was met with a heavy crackdown from the government security forces in 2017. As a result, the situation transformed into an armed conflict with increasing support by the population in the Anglophone regions to seek independence from Cameroun (French Cameroon) as an independent Federal Republic of Ambazonia. Since 2017, the conflict has continued unabated without any party seeming to surrender and thus end the war.”

The Nkafu Policy institute says despite attempts from national and the international communities to intervene and resolve this destructive conflict, it has nevertheless, resulted in an impasse. The government of Cameroon opted for a military strategy from the very beginning of the peaceful protest that quickly metamorphosed into an armed conflict. With the deepening of the crisis, the government has also made several peaceful concessions and top-down institutional responses, including the Major National Dialogue conveyed by the President of the Republic and chaired by the Prime Minister Chief Dr. Dion Ngute, from September 30 to October 4, 2019. Other institutional measures include among others, Setting up an English division of the Supreme Court and creating a Common Law Section at the National School of Administration and Magistracy, translating the OHADA Act to English, recruitment of bilingual teachers to teach in secondary schools; the government the institute said has increased   the resolve to implement effective decentralization, setting up a National Commission for Bilingualism and Multiculturalism as well putting in place the DDR program for ex-combatants of Boko Haram and Separatists fighters who drop their weapons, including the Presidential Plan for the Reconstruction of the NW and SW Regions

Despite these attempts made by the government to resolve the on-going armed conflict, the group noted have not succeeded in silencing the guns. The situation it says has even taken a critical twist with the mass killings of separatists by the Cameroonian military and counter killings with unarmed civilians, particularly women and children bearing the brunt of the price. Separatists’ leaders and fighters even appear to be more radicalized and galvanized with the increasing militarization of cities by government security forces.

Speaking during the webinar, panelists outlined the different mechanisms that must be put in place to end the conflict. Panelists laid emphasis on the root causes of the conflict which to Mr. Ndifor Richard is an institutional problem that involves the form of the state. Ndifor Richard, an Educator and community organizer said this form of the state has to do with the basis on which the union was formed in 1961 in Founban by adopting the federal system which brought together Southern Cameroon and La Republique du Cameroun. The educator said the problem in Cameroon began when the federal structure shifted to the United Republic of Cameroon and later on the Republic of Cameroon. This he says prompted nationalist feelings among Anglophones who started feeling that French Cameroon has seceded from the union or has colonized Southern Cameroon.

The community mobilizer said the dialogue the government organized fell short of resolving the conflict, urging that such dialogue must involve Anglophones on one side and the Central Government on the other side unlike the National Dialogue that had to do with the whole of Cameroon which to him rather addresses a national concern than the Anglophone problem

Participants were drawn from the public, private, academia, and civil society sectors, including youth leaders, journalists, researchers, traditional authorities, religious leaders as well as human rights activists, and other stakeholders interested in searching for an alternative and a peaceful solution to the Anglophone crisis.

The fundamental question the policy institute seeks to understand is why the crisis has been so difficult to be resolved despite all governmental and international initiatives. It noted there are  many discerning voices from  stakeholders in the conflict both from national and international communities who believed that if the government had not adopted a state-centric approach in resolving the crisis, the conflict should have long been sustainably resolved

This is the perspective that the Nkafu Policy Institute came up with this opportunity to engage all conflict stakeholders and the general public to participate in the public dialogue on whether the current state-centric approach can resolve the Anglophone conflict and bring about the most cherished peace and sustainable development in the affected regions in particular and Cameroon in general, while at the same time looking for other possible peaceful pathways to resolving the conflict sustainably.

Presentations focused on the different approaches that have been put in place to resolve the conflict as well as on the different actors that have intervened while also examining successes, challenges, and contentions. Other presentations also suggested ways forward in resolving the conflict, build peace and galvanize social cohesion and sustainable development in the conflict-affected regions in particular and Cameroon at large.