Winners of the National Essay Contest on Food Security 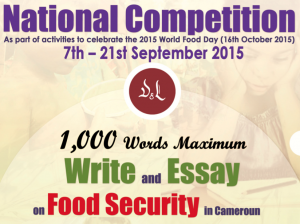 Yaounde, Cameroon (13 October 2015).  The Denis & Lenora Foretia Foundation is very excited to announce the winners of the National Essay Contest on Food Security in Cameroon. After reviewing more than 100 entries the Selection Committee is pleased to announce Ms. Ankwatia Guisilla Dedino as the overall winner. The second prize is awarded to Mr. Ndenkeh Nforbewing Jackson Jr while the third prize goes to Ms. Elvine Banadzem. These young Cameroonians will be awarded their prizes during the “Symposium on Food Security in Cameroon” on Friday 16 October 2015 as part of celebrations marking the 35th World Food Day. This event will take place at the Institut Francais Camerounais (IFC) in Downtown Yaounde. Detailed biographies of the award recipients and the winning essay is found below.

Ms. Ankwatia Guisilla Dedino is a 23 year-old female Cameroonian, from the South West region of Cameroon. She had secondary school education at Saint Joseph’s Catholic Comprehensive College (SJCCC), Mbengwi and high school education at Saint Bede’s College, Ashing-Kom. From these schools, she obtained her ordinary level and advanced level certificates, in the years 2008 and 2010 respectively. She is presently a 6th year medical student, studying General Medicine in the Faculty of Medicine and Biomedical Sciences, university of Yaoundé 1. She looks forward to becoming an apt medical doctor, so she can serve her nation worthily.

You can read her winning essay here

Mr. Ndenkeh Nforbewing Jackson Jr. attended secondary education in G.H.S. Mewungne-Awing where he obtained his G.C.E. Ordinary level Certificate in 2007. He then moved to CCAST Bambili where he got his G.C.E. Advanced level Certificate in 2009. Through a competitive entrance examination, he was enrolled into the University of Dschang to study Biomedical Sciences ending up with a Bachelor’s Degree with specialty Epidemiology and Public Health in 2012. Ndenkeh immediately engaged into the post graduate study earning a professional master’s in the same specialty in July 2015. He is somebody with an optimistic, enthusiastic and humorous personality which helps him easily integrate in new and familiar environments.

Born at Shisong General Hospital-Kumbo in the North West Region Ms. Banadzem grew up in Tobin-Kumbo where she attended Saint Theresia’s Primary and Nursery School Tobin. She continued on at the Government Bilingual High School Kumbo where she obtained her GCE Ordinary levels (2012) and Advanced levels (2014) in the sciences. She later matriculated the the passed the National Advanced School of Public Works in October 2014 where she is currently a second year student.

Please join us in congratulating these very deserving young Cameroonians.