Bamenda: Training Of Peace Advocates For The Peaceful Resolution Of Conflicts In Cameroon

Home/Bamenda: Training Of Peace Advocates For The Peaceful Resolution Of Conflicts In Cameroon 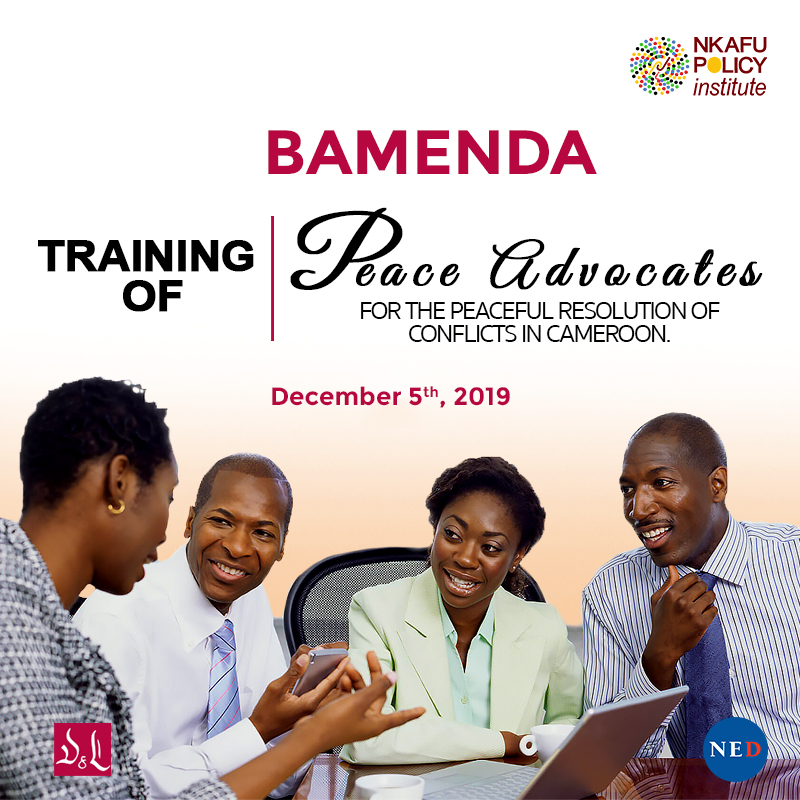 Bamenda: Training Of Peace Advocates For The Peaceful Resolution Of Conflicts In Cameroon

TRAINING OF PEACE ADVOCATES FOR THE PEACEFUL RESOLUTION OF CONFLICTS IN CAMEROON.

Cameroon has experienced political and economic stability for decades and continue to play a key role in Central Africa’s regional integration. The country has been widely praised for its ability to maintain the calm and peaceful coexistence of its numerous cultural, ethnic and religious groups – it has been called a bastion off   stability – notable when compared to numerous conflicts in neighbouring countries. For example, the Cameroonian community and institutions have demonstrated great resilience in response to the massive refugee crises on their various borders (e.g with Chad, CAR and Nigeria) including the terrorist attacks imposed on them in the Far-North by the Nigerian home-grown and deadly terrorist group Boko Haram. Cameroonians have called themselves ‘peaceful’ and tolerant’ people. However, since October 2016, with the emergence of the current Armed conflict in North- West (NW) and South-West (SW) Regions, this image of the country as an island of peace among many troubled countries and Cameroonians as ‘tolerant and peace-loving people’ has dramatically changed not for the good.

Rationale for the Training Workshop

In joining voices and to move the talk for the need for a peaceful resolution of the current violent conflict in the NW and SW Regions of Cameroon, The Nkafu Policy Institute (NPI) of The Denis & Lenora Foretia Foundation (DLF) has recently instituted a project titled: “Promoting lasting peace in Cameroon.” Within this broad project, NPI plans to host two leadership and capacity-building workshops for peace advocates. The organization will identify fifty (50) influential community leaders from all ten regions of Cameroon. The Denis and Lenora Foretia Foundation believes this diverse group of peace advocates will be able to bridge Cameroon’s tribal, cultural, political, and linguistic divides and promote peace in their communities.

To give participants the opportunity to inspire their communities as Peace Advocates/Agent: A Peace Advocate is an active peace builder who guides others in the endeavour of building sustainable peace starting with their own practice and community sharing.

Specifically, this training workshop will:

This training opportunity gives equal chance to both men and women, from all the 10 regions of Cameroon.  It particularly targets youth and women leaders who have so far influence their communities through their work for peace and development; civil society advocates, community leaders (including traditional authorities and church leaders), the media, students and all those interested in contributing to  peaceful and sustainable solution to the current destructive conflict in the Anglophone NW and SW Regions in particular and  Cameroon at large.

We are expecting to build the capacity of 50 peace advocates (Who have registered online through our call for application).