The full list of speakers and the moderator will be updated in the coming days. Current confirmed speakers:- 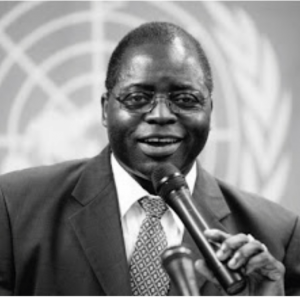 Dr. Simon Munzu is currently a Civil Society Actor and Former United Nations Assistant Secretary-General, Deputy Special Representative of the Secretary-General for Cote d’Ivoire. He was a high-ranking member of the CNU/CPDM in the mid 1980s and 1990s. He was former charge de mission of the central committee of the CNU under Ahidjo and later the National Secretary for Economic and Social Affairs in Biya’s CPDM. Munzu was one of the heroic trio (Anyangwe-Elad-Munzu) who convened the historic All Anglophone Conferences, AAC-1 and AAC-2, in Buea and Bamenda, in 1993 and 1994 respectively, during which two Southern Cameroons founding fathers, Foncha and Muna, with tears dripping from their eyes, admitted publicly that they blundered in negotiating the reunification arrangement with La Republique. Munzu was also co-founder of the Anglophone National Council, ANC, that later became the SCNC. Because of his commitment to the Anglophone cause he resigned from the CPDM party and from his job as Professor of laws at the University of Yaounde I. In 1995 Dr. Munzu joined the UN systems where he quickly rose through the ranks. He was appointed by UN Secretary General Ban Ki Moon in 2014 to the position of Assistant Secretary-General, Deputy Special Representative of the Secretary-General for Cote d’Ivoire, a position he held until August 2016.